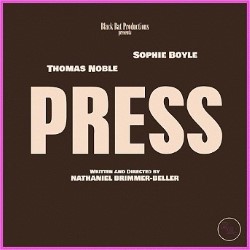 A witty, intelligent and unmissable satire of the movie industry starring a clever storyline and two outstanding performances

A timely piece of satire if there ever was one, Press from Black Bat Productions is about the desperate, greedy floundering that ensues whenever those at the top of Hollywood realise that they have messed up beyond words. In this instance, two acclaimed movie producers (played by Nathaniel Brimmer-Beller and Sophie Boyle) hit the emergency button when they realise that their new cinematic historical epic whitewashes its main character. What follows is a fast and sharply written critique of Hollywood’s empty attempts at reconciliation, driven by greed and the need to save face. More than that, it is incredibly funny.

Brimmer-Beller and Boyle are fantastic, rushing between ethically dubious phone calls and crude essentialisms littered throughout an intelligently written story. In different ways, both characters represent the sourest elements of movie PR: people who are hanging on by a thread and willing to disavow honesty to save their careers. Not once do either of the characters simply accept that they have made a monumental mistake. Although there are only ever two characters on stage, an entire world full of Hollywood stereotypes and figureheads is created outside of the pair’s panic room. That you never hear the other side of the conversation makes them feel all the more alone and desperate, contextualising the brutal plot twist that emerges in the final minutes.

Throughout Press there are also plenty of straight-faced, sincerely delivered jokes that make the situation seem both more ridiculous and more shocking. The show is an incredible amount of fun, the content of various conversations and the delivery of certain bombshell gags working an absolute treat. Brimmer-Beller’s script works so well because of how it uses comedy as a device to both build tension and highlight the sorry state of affairs that the play addresses.

A fantastically entertaining and thoughtful play with real social bite, Press is an outstanding piece of theatre that if anything feels over far too quickly. A driven, purposeful satire like this is hard to come by, and Press hits all the right notes with two on-point performances and a story crafted with a considerable amount of nuance.