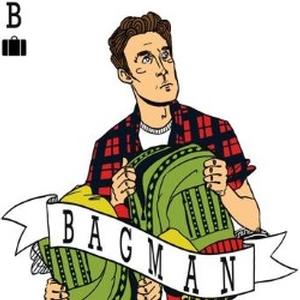 A wonderfully wacky look into the comedic back story of a cloakroom attendant.

"An underrated gem of a show"

Brendan Murphy, aka the Bagman, greets his modestly-sized audience with obvious enthusiasm, inquiring into the state of everyone’s health and remarking on the various aesthetic qualities of every bag he claps eyes upon. It’s a weird kind of showmanship – sort of in the vein of Dr Alan Statham from Green Wing or Mr Susan from The Mighty Boosh’s Mirror World – and it totally works.

Murphy never ceases to move or engage, darting energetically around the confines of this diminutive venue atop The Counting House. His tiny stage is crowded with props in the guise of bags of various shapes and sizes, as well as a collection of costumes which will serve him as he morphs from one oddball character into another throughout the course of the hour. It’s a one-man show in the truest sense of the word, but don’t for a minute think there’s only one role to play. Murphy has them all covered.

The first half of the show is undoubtedly stronger than the second, with the characters of classically trained actor Alan Lombarde and misfit children’s entertainer Bob Bourbon memorable creations. Though things slip away slightly in the second segment, Murphy has enough charisma and unbridled energy to push the show over the finish line to heartfelt applause. It’s no wonder he’s sweating buckets by the end; in addition to leaping about the stage like a madman, he’s kept his enthusiasm and intensity levels staggeringly high throughout. He’s earned his tips for that alone, if nothing else.

Of course, there is something else. The madcap story through which Murphy haphazardly guides us is utter hogwash, nothing more than a transparent construct in order to show off these crazy creations of his… but it doesn’t matter. The jokes – although sometimes telegraphed far in advance – are just quirky enough to earn plenty of laughs, while his own sense of comedic timing and delivery is top-notch, elevating decent material to heights of excellence.

Don’t go into this underrated gem of a show expecting highbrow comedy, clever circular jokes or any profound commentaries on society – but by all means, do go. If you love nothing more than to laugh at silly caricatures, self-deprecating jibes and wacky turns of phrase, you’ll be hard pushed to find a better hour of zany comedy in the Fringe this year. And give the Bagman some material, why don’t you? Bring your favourite holdall to the party. He’ll love you for it.