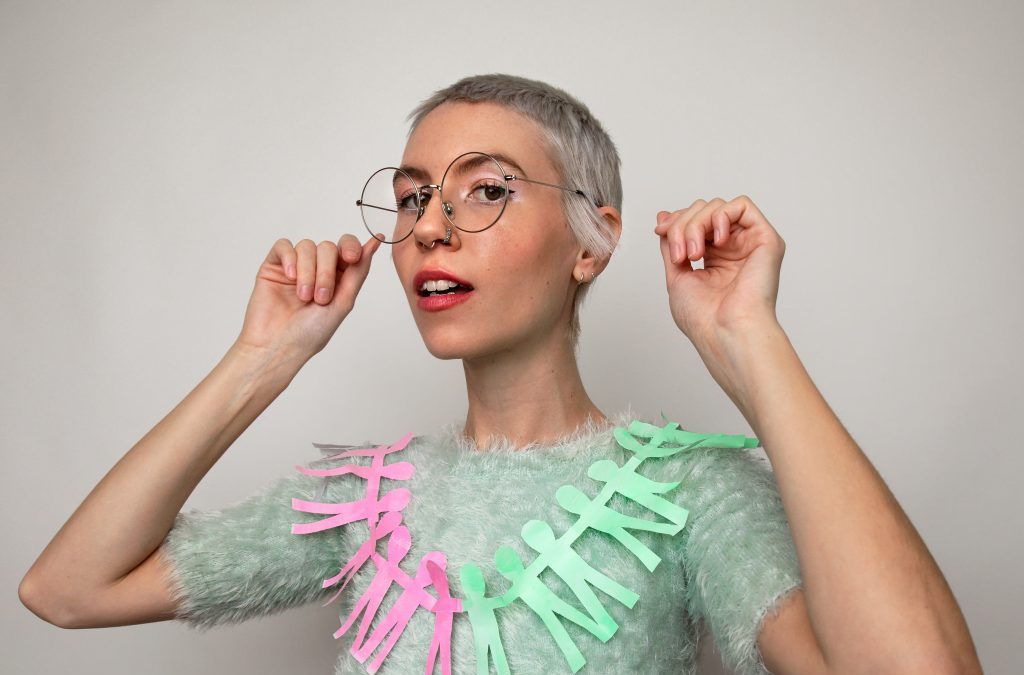 On one level, …Finds Her Audience is simply a vehicle for Eryn Tett to drop a ragbag of surreal one-liners on us. On another, it’s a clever challenge to the way comedy, indeed all art, is heading – into algorithmically generated mush.

Framed as market research into who her audience might be, with us as survey respondents/guinea pigs, it opens with a poser: does a comedian sculpt their comedy to suit a pre-existing audience or sculpt an audience to suit their comedy?

For Tett, clearly the latter. We’re not talking a set full of surefire Tim Vine-esque ba-dum-tishes. Her gags vary in gettability and style – visual, pun-based, paraprosdokians, pure whimsy – and land haphazardly across the room, depending who’s followed her train of thought down a scenic rural branch line. After an initial round of these, she slips back into researcher mode to quiz us on our reactions.

Now, this is an audience of normal people, not cynical old hacks. Naturally, when pressed by a comedian whose level of self-confidence is unascertained, their responses are going to be wholly encouraging. In-play reactions suggest not every gag lands; post-performance polling suggests otherwise. In fact, the crowd are one-upping each other. Thumbs up becomes two thumbs up becomes three. Tett colours her flip chart accordingly. Your correspondent gets booed simply for saying it’s too early to say. But really, if the show is toying with a survey format, all-round positivity isn’t giving Tett much room to play with.

A similar dynamic pertains when she asks us to assess a quote from Chortle about her which is, shall we say, descriptive of her onstage aesthetic. There is, rightly, a debate over how critics describe the acts they’re reviewing, but with comedians, physical presence and comportment is part of the armory so, within reason, worth remarking on. Nevertheless, the audience are asked to rate the comment’s truthfulness and are condemnatory – ‘rude’, ‘not true’, ‘one out of ten’. It’s not unambiguously rude. In fact, reviewer omerta obliges me to close ranks with Steve Bennett and say it’s value neutral and descriptively accurate. But that’s beside the point. Even Tett seems surprised by the wholesale agreement. Unanimity does not leave much room for nuance or tension. Was this meant as pure Bennett-baiting? Finding her audience through a sympathy vote? Or was a difference of opinion anticipated to create a spark? We never learn.

The audience speaking as one is a shame for the flow of the show. There’s a second round of one-liners and a second round of approbation. It’s like a general election where no seats change hands. Some sense of momentum in Tett’s direction (or indeed, vice versa) would certainly make things more interesting. But while that may be a potential chink in the format, it doesn’t undermine this intriguing show. It is haunted with a depressing subtext of what comedy determined by number of likes would be. We all of us like different things for different reasons and even comedy tailor-made to fit the firing of our own neurons might not be all its cracked up to be. The Eryn Tetts that have been appearing in the stage-side video screen for short sketches have been as oblique as their on-stage counterpart, but there’s also been something slightly dystopian about them. When Tett turns to the screen again for the denouement, the comedy dystopia gets fully realised.

The jury’s still out on whether this audience was Eryn Tett’s audience. They think they were and maybe that’s all that matters. Someone certainly should be, because this is interesting stuff.