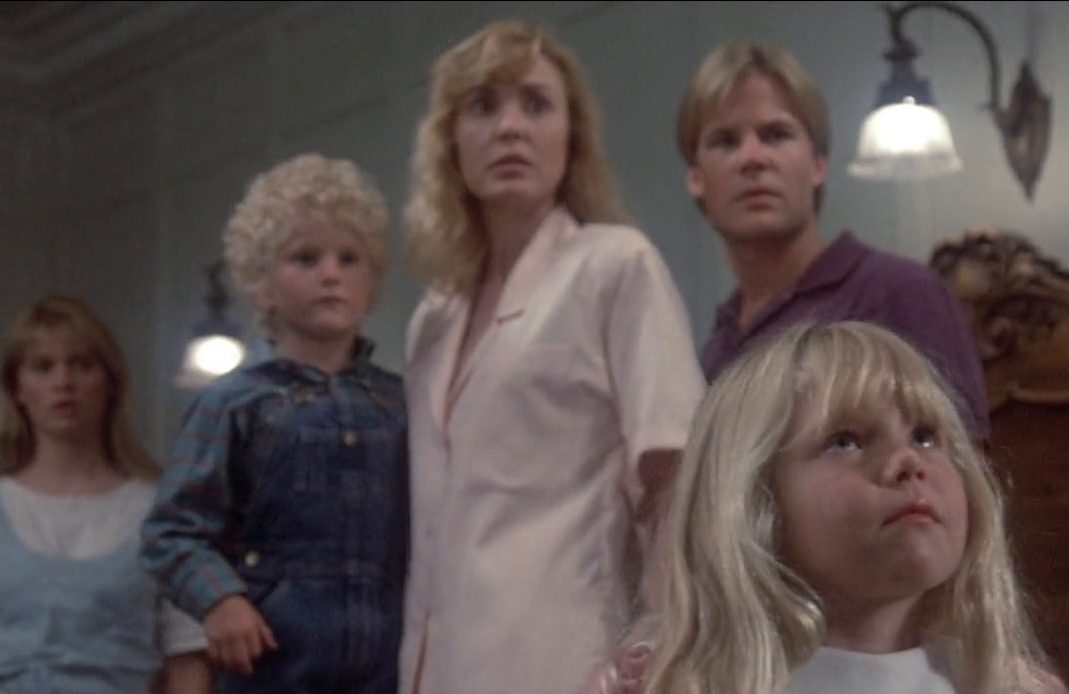 Flowers In The Attic

Schlocky country house horror is an uncomfortable watch but not in the way intended.

A schlocky, psychological horror with ropey acting and plot holes, Flowers In The Attic doesn’t quite qualify as so-bad-it’s-good. In fact, it’s a wonder the 1979 novel survived this to be remade in 2014 with Heather Graham.

Newly widowed mother-of-four Corinne (Victoria Tennant) is forced by economic circumstance to return to her estranged parents’ country pile. Her plan, as she explains to the kids in one of several clumsy pieces of exposition, is to win her way back into her terminally ill father’s affection, and thereby his will. But grandmama is the “children should be seen and not heard” type and has the kids locked in an attic bedroom while she makes their mother atone for the “sins” that caused her estrangement. Thus begins years of torment for the children as they figure out how to escape…

It’s narrated in flashback by the eldest daughter, Cathy (Clare Peck), though to little purpose other than explaining the back story and postscript. Action largely centres on the kids’ bids for freedom, and their growing sense that all is not right with mother as she reacquaints herself with her parents. Louise Fletcher makes a good stab as the gran from hell, meting out regular punishments, but she’s better than this.

Grandma’s disciplinarian streak is not the only disturbing thing about the film. The whole family is creepily Aryan. The two older siblings (Kristy Swanson and Jeb Stuart Adams) are adults cast in teenage roles, which is obvious to the point of weirdness. There is also an incestuous undercurrent – insistence on bed sharing, walking in on each other bathing – which is not fully explained, but apparently a key plot point in the novel. No doubt it was bowdlerised to protect audience sensibilities, but instead of confronting it directly, it’s left hanging awkwardly and unresolved, which is no sort of solution.

Swanson and Adams’ acting rarely rises above daytime soap, Swanson’s in particular. Plus, Adams is so obviously a grown adult man (he was 26 at the time) that it emphasises an obvious plot hole. Their only oppressor is an elderly lady who arrives every day to bring them breakfast. Why don’t they just overpower her and walk out? Instead, they end up re-incarcerating themselves at every opportunity. Tension is the intention, but you’re left feeling bemusement.

The film’s partly redeemed by some excellent incidental music (Christopher Young) and cinematography (Gil Hubbs) – the old house is used to great effect for framing shots, and the facial close-ups and pans past the huddled children have the right effect. There’s definitely a rainy-day-with-nothing-to-do appeal to watching it, but it encourages a different kind of odd discomfort than the one the producers intended.