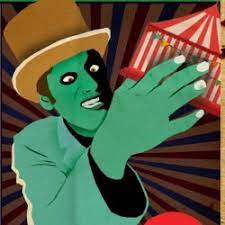 Frighthouse Presents: The Wheel of Misfortune

A well performed and enthusiastic slice of horror comedy, often making the most of its limited performance space

A mixed but solid hour of farcical, darkly entertaining performance

Welcomed into the venue by a jumping, over-the-top host with an elaborate face mask, you know that The Wheel of Misfortune isn’t exactly going to be restrained. Indeed, what follows is an over-the-top, occasionally crass and always spirited session of comically dark horror stories, acted out on a bare stage by an enthusiastic cast (some of whom are performing at the Fringe for the first time). The result is a mixed but solid hour of farcical, darkly entertaining performance from Frighthouse that makes the most of a limited space.

The first story of the night, a scary twist on the Easter bunny, is a bit too ham-fisted to work as well as it is meant to. What really works however is the incorporation of a screen at the back of the stage facing the crowd, bringing in a multimedia element and allowing the cast to creep out the audience in a way not possible with acting alone (their bunny makes the Monty Python killer rabbit look like Thumper from Bambi). The cast repeatedly also make great use of the space available to them, winding in and out of the crowd to either spook them or make them giggle, often succeeding on both counts. A pair of clowns making their way through the audience is especially unnerving.

The highlight of The Wheel of Misfortune proves to be the closing story, a nightmarish, genuinely terrifying dive into fears of debt and corporate greed – you will be staying well away from anybody called Bill. Such an atmosphere is not easy to generate in a venue where the noise of a rowdy pub easily overflows into the venue, but thanks to dedicated performances and some simple but effective lighting, it achieves it nonetheless.

Horror theatre can go bigger, scarier and more subversive than this – see Urban Death from the Fringe in 2018 for a near-textbook lesson on that – but The Wheel of Misfortune doesn’t strive for such heights. Instead it is a hammy, spirited and often very funny evening out, representing a Fringe debut to be proud of for its passionate and talented cast.