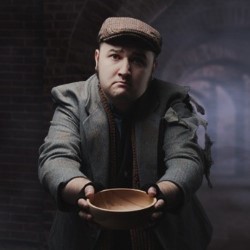 The age of 24 always sounds like a good time of life – you’re young and theoretically free from responsibilities, but old enough to be your own person and follow your own path. You’re entering your prime. Things happen though; reality hits, and you look at those around you, begin to compare, and wonder, “what on earth am I doing with my life?”

Such a moment of realisation hit Gareth Mutch. Out with two drinking buddies, he was shocked to discover these radges have now mellowed into serious jobs like teaching, while he drinks and tries to make people laugh for a living. Maybe he Wants Mutch More than that.

To be fair, it’s not the comedy that’s the problem. That’s going alright for him. It’s all he’s wanted to do since meeting hero Rhod Gilbert at the Fringe ten years ago, and his debut show Mutch Ado About Nothing did so well he got booked to do a sell-out gig with very expensive tickets in Dunfermline. OK, as he goes on to explain, the elderly crowd may have misunderstood what they were about to see, but still…

Really, it’s the other things in life that he feels he’s missing out on. Dating isn’t working out for him, and ridiculous reality TV shows don’t help. He’s got analyses of each of the TV dating triumvirate – Love Island, The Undateables, First Dates – and thinks they’re each in their own way problematic. Still, he’s trying to learn from all of them, by filming his undateable self on a first date, and recruiting his pal, Love Island‘s Iain Stirling, to narrate. The resultant very slick video allows him to send up his own dating hopelessness, and spoof tropes from the TV shows. It slightly outperforms the build-up material which meanders a little too much, not aided on this occasion by a couple of worse-for-wear lads who are slow on the uptake when he tries to interact.

Next up on the list of things he wants more of is travel. This sets him up to tell a story of a recent visit to Prague, home of famously cheap beer and lairy stag dos. (The worse-for-wear lads chime back in at this point, but Mutch has got the measure of them, not winding them up, but keeping the audience amused.) This particular story has him visiting a Prague strip bar with an overly enthusiastic American woman, giving him a whole new perspective on that particular activity.

After some more material about ways in which he wants to build for the future, an anecdote appears about his reactions to horror films. It’s amusing enough, but it’s connection to the show’s theme gets lost in the telling. The show then climaxes with a sweet video ending, which isn’t going to be spoiled here.

Familiar though the themes of this show are, you can’t knock Mutch for giving his own personal spin to them. He’s got years ahead of him to explore other topics. For now, dating disasters and holiday tales suit him just fine. He does linger too long on some stories, padding them out with extra lines when we’ve already got the drift and are ready to move on, particularly with his Dunfermline anecdote. However, the audience are all kept on board. It’s an amusing, accessible hour from a man we’ll hear mutch more of.