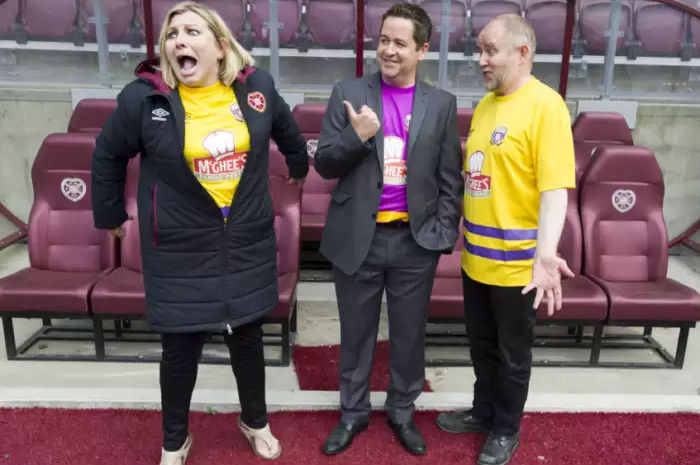 Weak, generic comedy about the plight of a lower league football club

Everyone loves a pie, but you can stretch a point too far, and this comedy play in which the entire fate of fictional football club Dunwearie FC hangs on whether local pastry-maker The Pieman will waive some of his outstanding invoices scrapes the bottom of a fair few barrels.

Co-writers Bryan Jackson and David Belcher have singled out a decent enough subject (a small-time Scottish football club in financial dire straits), on which they’re both well qualified to write (Jackson as a chartered accountant of 40 years, Belcher as a journalist and football fan with a previous football play under his belt) and they’ve played it for laughs in the style of many a small town comedy of yesteryear (the likes of Up ‘n’ Under come to mind). This is all well and good. But it’s far too generic, laden with clichés and, like the pies, devoid of any proper meat. It would work for a local drama group, but doesn’t really cut it at the Fringe.

Characters have the subtlety of a kids’ book. Mr Ledger the accountant, Jim Glum the manager – the characterisation is no less obvious than the names. The story in which they find themselves is no stronger, and places silliness above sense. Limp lines like “the pie’s the limit” and “where there’s hope, there’s fitba’” are typical of the dialogue.

Ledger, the administrator brought into clear up the club’s finances, goes on a journey of sorts, convinced by the pie-loving people he meets into wanting the club to survive, but we’re never really in any doubt as to the outcome and that the solution, unlikely as it seems, lies with the club’s catering supplier. None of the other characters stick around with him on this journey. Ledger’s the only constant, meeting stock characters purely so that they can say or do something daft. Thus we get moments like a football grandee impersonating Angus Young out of AC/DC for no reason related to the narrative.

In the style of many a sports film, they use news broadcasts to shift the action on; in this case, it’s a local radio duo. But they never stick to news broadcasting mode, switching awkwardly between presenting to us, and interacting with other characters. They’ve not even thought up a proper name. It’s simply Radio Fitba’, introduced with a jingle tooted on a kazoo.

All said, there’s some decent comic turns from the cast of three (Ross Allan as Ledger, and Julie Coombe and Callum Cuthbertson multi-roling the other parts). They can deliver a line, even when the comedy’s weak, and know how to coax a laugh from people with physical exaggeration. Indeed, some in the audience lap it up, so the thin writing isn’t a problem for everyone. Coombe’s trademark grumpy manager hollering and gesturing from the sideline is probably the funniest in that regard. But it’s template stuff in a storyline that doesn’t take us far. We never even get the resolution to the cup final they’re all sitting down to at the beginning.