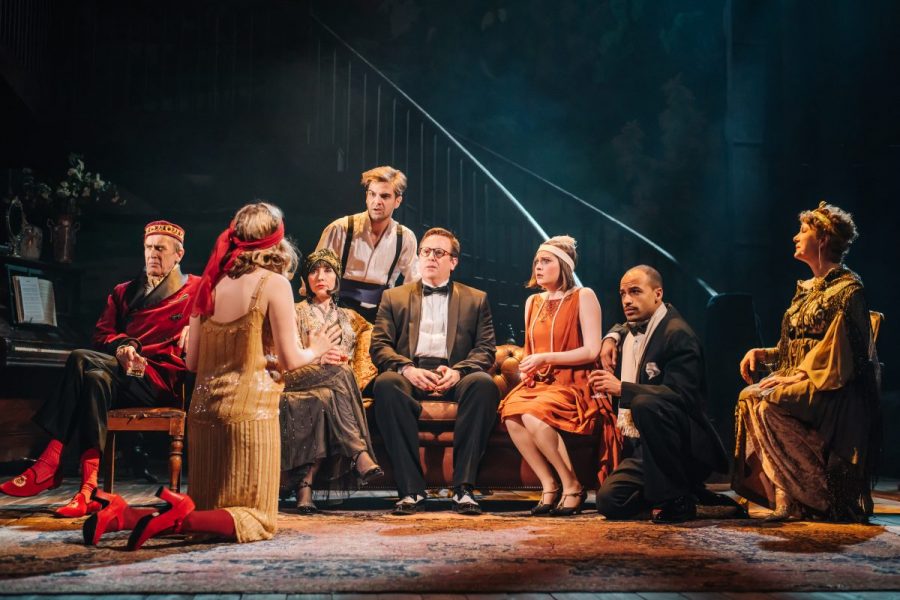 Noël Coward’s amused observations of heterosexual marriage and mating rituals are always funny, wry and seemingly observed by a being on high. As a patrician gay man Coward was a being on high. It’s difficult not to see his plays (and films like Brief Encounter) as being veiled references to gay relationships (seen largely as unspoken – and often unspeakable – in his own lifetime).

Hay Fever, a Royal Lyceum and Glasgow Citizen’s co-production, dates from the 1920s and is his usual blend of upper-class toffs getting their knickers in a twist about past infidelities and present indiscretions. Hugely popular in its day, it’s a testament to Coward’s enduring wit that his work can still draw audiences 80 years later. Anyhow, Coward defies any kind of updating.

We are in country house weekend territory and each member of the bohemian Bliss family has invited someone to stay over for a little companionship and amour but the others don’t approve. Someone is forever saying things like ‘you’re a darling and I adore you’… all very English.

The self-absorbed Blisses seem much happier in each other’s company than with their oh-so-trying guests. And their guests are appalled at the rude behaviour of their hosts – afternoon tiffin consists of sipping tea and eating a banana in rigid silence.

It’s the sort of play that’s bound to please the Morningside Malteser-munchers, but this is no galumphing show. Thankfully, it’s played with aplomb and spirited grace by all concerned. Standouts include Katie Barnett in the thankless role of the excruciatingly shy Jackie. It’s difficult to see matriarch Judith (Susan Wooldridge) as a West End star, her voice seems strained. Myra McFadyen as Clara, the former dresser turned housekeeper, performs a wonderful distraction during a late scene change when she comes in front of the curtain to sing songs from the Coward songbook like Someday I’ll Find You and Mad About the Boy. In carpet slippers and Nora Batty hosiery, she’s like a Gorbals Piaf.

Everyone has to be light on their feet to pull off Coward’s clipped ribbing and repartee. Producing a play in this rarefied atmosphere is difficult to do successfully and believably but director Dominic Hill has a sure grasp of his material.

It’s a piece of candyfloss wrapped around betrayal, jealousy and eccentricity. And there’s plenty of Coward aphorisms. Says Mrs Bliss at one point ‘youth, what a strange mad muddle you make of things’. And although it’s pleasant enough don’t expect many belly laughs. When flapper Myra (Pauline Knowles) says ‘this weekend is going to be strenuous’ the house titters furiously. Tonight, a trolley of breakfast things accidentally tips over on stage with a crash and the actors have to ad lib. It brings the house down. Director Hill should think of reinstating this hilarious bit of business every night.