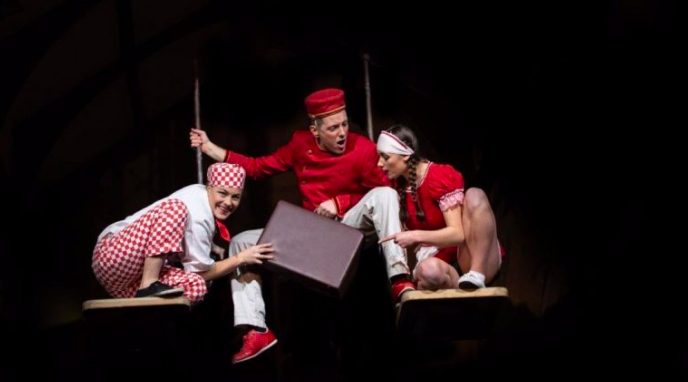 Innovative and extraordinary, this circus can only become even greater

Hotel Paradiso from the Lost in Translation Circus company is an innovative and extraordinary show.  Instead of the normal circus ring set up with one act following after another, the company have devised a play and characters and the audience are greeted by the hotel’s bellhop as they enter and then encounter the Basil-Fawlty-lookalike, Serge the Concierge, as they take their seats.  “Welcome, welcome,” he trills.

Thus begins the story of Madame and the much beleaguered Hotel Paradiso, and as the cast move effortlessly from story to circus turn and back again we learn of the horrible history of the establishment, the mysterious writer of love letters and the evil banker, Madame Sausage, who has given the staff just twenty-four hours to raise the money needed to retain the hotel.  And during this time the audience are treated to some amazing aerial work, juggling, balancing and possibly the most stupendous hula girl routine ever put onto a circus stage.

However, there are a couple of little things that let it down.  The idea of scripting the piece is pure genius.  Sadly, the script itself is not, and the company really need to hire a script writer as, currently, they’re hovering somewhere between a Brian Rix farce and a poor man’s Fawlty Towers.  Secondly, the current hotel set using a selection of doors which can be moved around to act as acrobatic props is again inspired, but the troupe really need to hire a set designer, or at least a decorator.  The set, as it stands, looks as if it was painted out the back of the tent.  And, please, please, please bring this show back next year as a non-family production – there is so much potential here for darker routines and more sophisticated clowning rather than the descents into buffoonery in the current production.

Make no mistake, this is a really amazing show, bu there is an even greater one fighting to get out.