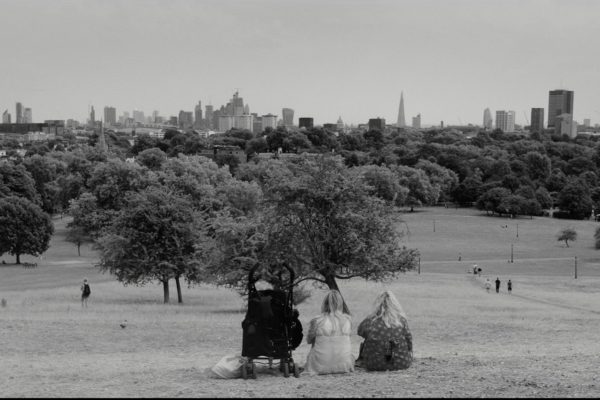 Greta Bellamacina opens her debut feature Hurt by Paradise by evoking Woody Allen‘s Manhattan.  The veteran director may have plummeted from grace with Luciferian velocity, but if you want to reference a classic, you could do worse than Allen’s introductory love letter to his home city.  Bellamacina’s Celeste provides florid narration as we’re shown the sights of London W1 in high-contrast black-and-white.  Celeste is a poet and sees it very much as a vocation, not a hobby.  As she tries to eke out a career, she relies heavily on her slightly more pragmatic friend Stella (co-writer Sadie Brown).  Stella is an aspiring actress, yet more often assumes the roles of babysitter and sounding board for her flighty friend.

The collaboration between Noah Baumbach and Greta Gerwig is another touchstone as, like that pairing’s Frances Ha, Hurt by Paradise works best as an intricately observed story of an artistic type striving for success against dwindling returns; albeit a thunderously middle class one.

Bellamacina is a writer and poet as well as filmmaker, so there so there is obviously more than a dash of autobiography about Celeste.  She is however smart enough to undercut Celeste’s high-minded pretensions with the implacable mundanity of her life.  She also contrasts her poems with her day-to-day existence as a single mother.  In these moments the screen bursts into colour and the rich verse overlays affectionate moments between mother and son; playing, changing nappies, or curled up asleep together.  It’s as if the components of her world coalesce into perfection in those moments, and they are the most affecting part of the film.

The friendship between Celeste and Stella is also nicely depicted. As in many friendships, Celeste is overwhelmingly the beneficiary of this unbalanced relationship and it’s not entirely clear what Stella gains from the association.  She does however get the best of the dialogue.  “They told me my face was too ad-hoc,” she sighs as she relates another tale of a failed audition.

Even with this blunting of Celeste’s character, Hurt by Paradise is still a film defined by the very specific Bohemian milieu in which it takes place.  For all the references to unpaid bills and potential publishers sadly claiming that poetry only sells posthumously, money troubles seem peripheral, and there’s still the whiff of other-wordly privilege in the air.

One suspects Ballamacina and Brown may not have had complete confidence in letting the characters sustain the film, as there are two apparently incidental narrative threads that slam crudely together in a piece of dramatic contrivance that is almost unforgivable.  For all the teeth-itching Fitzrovian specificity and ‘Mumblecore‘ trappings, there is until that point the ring of truth and authenticity that comes when writers are immersed in their subjects.  Thankfully, Hurt by Paradise just about recovers as there is more enough evidence of a talented polyglot at work, coasting by as it does on the assured characterisation of the two friends, and a willingness to scrutinise its protagonist.  Bellamacina may have found her poetic voice; it remains to be seen whether she can step out from the obvious influences of Allen, Baumbach and Gerwig and sing her own tune.