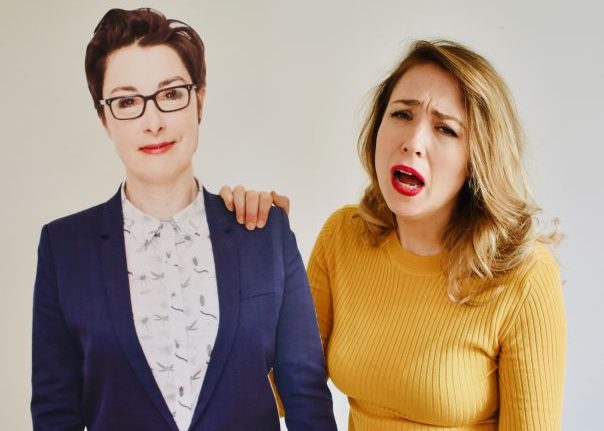 On the surface Eleanor Higgins’s one-woman show, based on true events, is about an obsession with Sue Perkins – the life-size cut-out and framed pictures on stage would give that away – but In PurSUEt is actually a well written and performed tragicomedy on addiction, depression and denial.

The play begins with Higgins cross-legged on the floor of her home, next to a Christmas tree, drinking wine straight from the bottle as O Holy Night plays in the background. A bottle of pills is opened, then spilled without its intention realised. The action moves to a therapist’s office where the remainder of the piece takes place.

In PurSUEt sees our unnamed heroine tell her story of admiration and obsession with Perkins while firmly in denial about the alcohol dependence threatening her sanity. Higgins rambles about the state of the world and how she’s the normal one, it’s the rest of the world that’s gone mad. The usual cultural touchpoints are covered – Trump, Brexit and, humorously, Pokemon Go. We learn of our protagonist’s quests to meet Perkins, in the hopes the star will fall in love with her.

In the 45 minutes on stage Higgins is barely still. She paces, gesticulates wildly and acts out increasingly erratic moments from her life, which always seem to happen after “a few wines.” Stalking Perkins via festival and TV appearances and book signings, the monologue is made more upsetting by Higgins’s portrayal of denial. She uses humour to distract and deflect attention from her underlying issues and the play is frequently funny, with an undeniable pathos laced into the story.

The play excels in the quieter, less hammy moments – when subtle gestures and facial expressions let the audience in on the inner turmoil behind the humour. Higgins has crafted a character the audience can empathise with and root for, even as her behaviour becomes increasingly unsettling.

Comparisons to Fleabag are made on the show flyer and while it’s inevitable that every one-woman Fringe play since 2013 would be compared to Phoebe Waller-Bridge’s magnum opus, solo stage performances existed before and will continue long after the F-word is no longer spoken. In PurSUEt should stand alone in its own right – a tragic, comic depiction of the complexities of humanity which is captivating and heartbreaking.