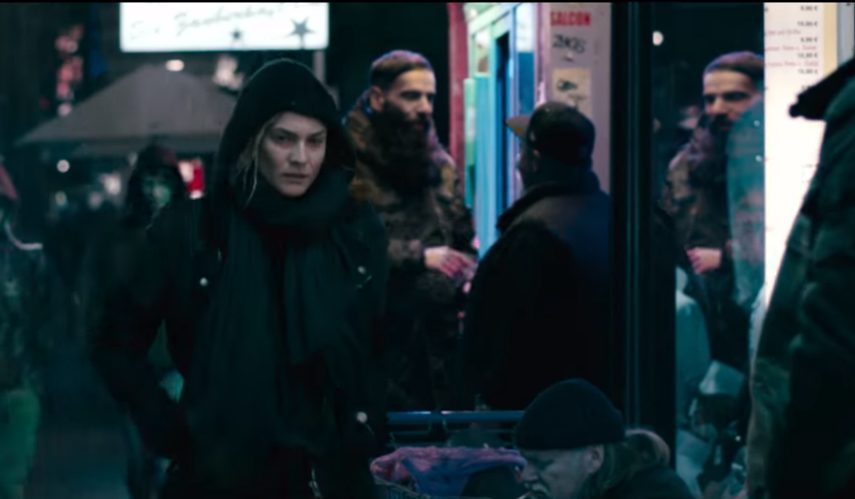 Diane Kruger won the Best Actress at Cannes last year for her performance in In the Fade, a timely thriller from Fatih Akin which is just as unsettling as it is tragic.

The film begins with a wedding between Katja (Kruger) and Nuri (Numan Acar) whilst he serves time in prison for drug dealing. This sets in motion the first of three parts, “The Family”, focusing on the couple living a happy life where Nuri has bettered himself outside with a successful career and the couple’s six-year old son, Rocco.

Katja’s life changes forever one evening when she discovers that her husband and son have been killed in a nail bomb attack. Though the crime appears to have been perpetrated by a neo-Nazi couple,  even with a media appeal for one of the suspects, the investigation also examines the possibility that the bombing was a revenge attack on Nuri, likely linked to his past.

In spite of her grief, Katja finds the strength to testify against the criminals who are bought to trial in the second part, “Justice”. This then leads up to the concluding part, “The Sea”, which focuses on the themes of vengeance.

The director, who is of German and Turkish origin, has previous with focusing on the themes of immigration as shown in diverse films like the multi-strand The Edge of Heaven and the teenage comedy Tschick. Here, he presents a devastating look into the effects of immigration becoming prone to the ideologies of far-right extremism.

The film mainly relies on the performance of Kruger, who undergoes a whole variety of emotions and behavioural changes as the film leads up to its thought-provoking climax. From displaying delight to genuine horror, the first act is dominated by Kruger justifying her victory at Cannes. Her journey from being the happiest one could be to suffering the most unimaginable of trauma is felt in a bravura performance which is both devastating and affecting, with a scene where she openly weeps in her son’s bedroom a key moment.

The film emphasises danger even before the actual bombing takes place, when both mother and son are nearly run over by a car. Though they are lucky on this occasion, this places the viewer in an uneasy motion because we know what is to come, having already seen one close call succeeded by an act of unbearable brutality.

Akin pulls no punches in preparing us for the worst, notably on the last occasion mother and son see each other with boy waving goodbye with such ominous effect that something so innocent appears genuinely chilling. We the viewers are spared the sight of the actual bombing but seeing what occurs beforehand is just as effective.

As Akin combines the feel of bereavement with the use of suspicion, he switches genres to illustrate the journey that Katja undergoes. It plays as a love story at first, before venturing into the bereavement phase, succeeding thanks to its usage of location and characters. The transformation into courtroom drama is a convincing use of storytelling, while the descent into apparent revenge drama feels unorthodox but sufficient.

There is no question that its central performance is where the film’s biggest strength comes from, but In the Fade is a good work that succeeds generally, even despite its lack of originality.