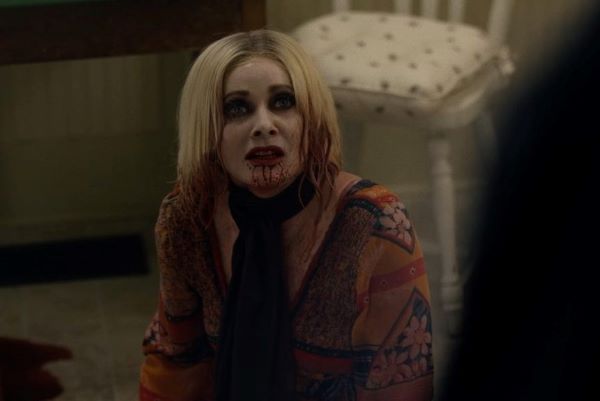 Barbara Crampton has a bloody good time reclaiming her womanhood

Jakob’s Wife, as its title alludes, is a tart comedy-horror about the limitations placed on women, and how they’re often viewed solely in terms in relation to others; principally as a wife or a mother. Anne (Barbara Crampton) is the dutiful, but stifled wife of pastor Jakob (Larry Fessenden). She’s always seen by her husband’s side, but she’s not ever really seen. Those who looked closer, including her husband, would see the resentment and the unfulfillment barely below the surface. It’s not surprising then, that a meeting with an old flame proves a life-changing event, but certainly not in the way she expected.

Travis Stevens’ witty, gory sophomore feature is a neat emancipatory spin on the hoary old vampire tale. It also serves as an excellent vehicle for ’80s horror icon Crampton who, mindful that if you want something done it’s best to do it yourself, has spent years developing the project. This welcome renaissance for the star mirrors, clearly intentionally, the new lease of (after)life for Anne. Once bitten, she’s no longer shy. It isn’t long before she’s become more assertive, more confident, and rediscovers her own needs and desires. However, her revival comes with a body count, which is really going to make or break a marriage.

In truth, the vampire angle is window dressing for a late middle-age take on a screwball comedy. The sexual allure of the undead is simply an easy and elegant metaphor for Anne’s transformation. No supernatural element is needed as a voracious, glammed-up Crampton slinks through a supermarket like the coolest of cats; it’s simply a woman in late middle-age reclaiming her identity as a sexual being. The blood does come, in great spurting geysers with murders frequently played as slapstick, the deaths having little consequence. There’s a hint of John Waters‘ absurdist Serial Mom, and the delicious black comedy bite of Heathers. The other characters are purely disposable, because the heart of the film lies squarely with Anne and Jakob.

Crampton and Fessenden are superb together, and it’s to Fessenden’s credit that Larry becomes a sympathetic character in his own right. Initially portrayed as a grotesque little man who’s administration of his flock is a study in complacent paternalism, we come to realise he’s as stuck in a rut as much as Anne. He just takes time to realise it. And that time is when he finds her biting the head off her latest victim. Suddenly he’s adopted the mantle of fearless vampire killer – bluntly symbolic stake in hand – with a revived emotional and sexual interest in Anne that spins rounds a whirling attraction and repulsion to what she has become. “This is what I was trained for,” he exclaims. “To fight evil!”

But this is really Barbara Crampton’s show. There’s a reason her star has endured as a genre icon beyond the nostalgia of the ’80s horror brats who are now wielding film cameras. She remains effortlessly charismatic, and deals with every facet of Anne’s transformation with humour and confidence. Anne’s undead journey may be somewhat perfunctory in its adherence to vampire movie tropes, and is topped off with a climactic showdown that is fairly underwhelming. But that hardly matters in a film that takes its protagonist’s plight incredibly seriously, but in the most delightfully goofy way possible. Crampton is far more of a scream than anything the horror element provokes, but it’s an absolute pleasure to see her lead a film, particularly one that is as much fun as this.