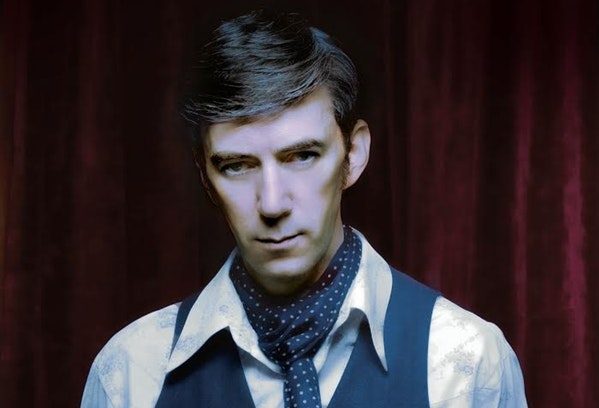 Grant’s new 2019/20 tour takes him to various venues in the UK before closing at Celtic Connections in January, but kicks off here in Largs.

Lounge, an award-winning venue for its food, also hosts regular folk and open mic nights and opening for Grant is local favourite and regular, Findlay Quinn. Having a guitar string break before your opening song would phase the best of us; Quinn takes it in his stride, calmly changing guitars whilst saying what a privilege it is to open for James Grant. He goes on to deliver a decent set which includes covers of Bill Withers and The Kinks.

Grant enters to loud applause, general high energy enthusiasm and whoops of encouragement. His dedicated following obviously anticipates a good night. Getting himself comfortable on his stool, Grant in his inimitable laconic style quips, with an impish grin, ‘So, you ready for a night of misery?’ This an obvious reference both to the lyrics and style of his moodier songs, particularly in an acoustic set, as well as his reputation of being a bit of a curmudgeon at times. Hardly were the words out of his mouth (to cheers and laughs of understanding) than song requests were being shouted for from all four corners of the room. Going by the requests, some people’s favourites were from Love and Money, Grant’s band of the mid to late 1980s, but this was mirrored by fans of his solo albums crying out for their choices. Suffice to say, as the gig came to its close, all would be satisfied.

He opens his first half set with I Can’t Stop Bleeding from the Sawdust In My Veins album. Given the audience response, Grant would have had to bite into a lemon to take the grin off his face. The show is underway.

The opener is quickly followed by Whisky Dream, Walk The Last Mile and Jocelyn Square, all from his time with Love And Money. Each song is interspersed with hilarious stories, anecdotes and tales of pop fame and having things lavished upon them by their record company. Grant is then joined stage left by ‘Mr Harmonica’ himself, Fraser Speirs. For those who are unacquainted with Speirs, the man is a legend, particularly in the Scottish music scene. To follow: Papa Death, Jacqueline’s Shoes, Lips Like Ether; these are two guys in rare, mesmeric form. To Grant’s beguiling and intense soul-wrenching vocal and musicianship, add Speirs, the man with an orchestra at his lips. The outcome is sensational. My Fathers Coat, this moving song, is preceded by Grant, telling us of his not perfect relationship with his father. Fair play, he did ask us at the beginning if we were ready for an evening of misery!

After a short break we are introduced into the ‘Wonderful World Of James Grant.’ He chats to his fans, who are having a rapturous time of it, telling them about his songwriting, how he shares and develops skills in those who desire to master the dark art. This introduces us to the opening number, Piglet, a tale of a songwriter’s revenge, followed by Little Gun, the title track of an EP Grant is bringing out in 2020. Much to the delight of the crowd the gig moves on apace. Of particular note is a medley, or rather a jamming session, with Grant and Speirs in inspired form on Looking For Angeline, Sometimes I Want To Give Up and Last Ship On The River. The place is bouncing, and the punters are shouting, clapping and having a rare old night of it. After a lot more numbers Grant and Speirs get their due ovation, the crowd get their due encore.