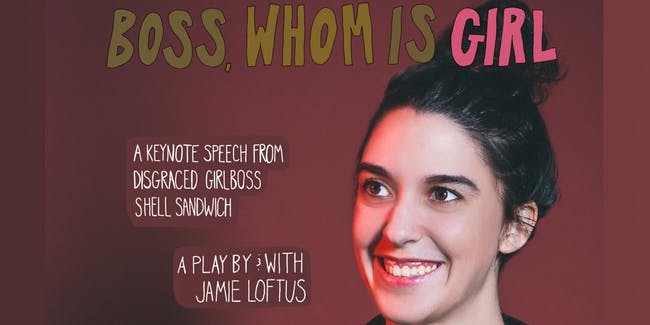 Jamie Loftus
Boss, Whom is Girl

As the audience pile into the venue for Jamie Loftus: Boss, Whom is Girl, they receive a non-disclosure agreement. This agreement seems to contain the rantings of a maniac and comprises thinly veiled threats of violence, along with mentions of Patricia and some sort of catastrophic event involving DJ’s. Upon first read, this agreement seems to be complete nonsense. However, after Jamie Loftus packs an hour of brilliant storytelling into her one-woman show, the contract seems very much ‘on brand’ for her character.

Loftus plays Shell Gasoline-Sandwich, the founder of a smart homes business, who enters the stage set at a girl boss conference to deliver a keynote address. Infamous Thernaos founder Elizabeth Holmes clearly serves as inspiration for Loftus’s character, as she rocks a black turtleneck and uses a voice that seems at least two octaves lower than natural. In addition, Gasoline-Sandwich also appears to channel Facebook founder Mark Zuckerberg’s alleged loose morals and lack of accountability.

During the hilariously tone-deaf speech, Loftus explores the challenges of upholding feminist values, whilst trying to succeed in a capitalist society. The comedian accomplishes this by explaining an absurd three part system to empower girl bosses worldwide. Whilst laying out the foundation of this system, it becomes clear that not only does it target an elite few, but it also values monetary success rather than empowerment of women.

Although her speech can stand on its own, Loftus truly shines when interacting with Patricia, a smart-home technology voice, who also appears to be gaining consciousness. She also selects men from the audience, known as ‘allies,’ to help explain her system. Her wit and comedic timing are on full display through these interactions, and were certainly the highlight of the show. At this particular viewing she had both participants that were too eager to make the show their own, and those that would not provide Loftus with much material. Thankfully her improvisation skills smashed both obstacles.

Through the keynote speech, interaction with the audience, and spats with Patricia, Loftus creates a surprisingly comprehensive biography for her character. Each minute of the show provides a bit more insight into the motivations of the character, culminating in a last resort ending that provides the audience with gale-force laughter and an appreciation for the deeper themes of this intensely enjoyable hour.