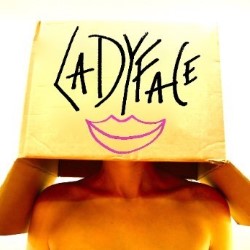 Sweet and spiky characters galore in a charming performance.

In good company with other excellent character comedians that have graced the Fringe this year is Lucy Farrett.  In LadyFace, she crafts delicate humour from a revolving cast of eight characters, using a charming homemade aesthetic that is neatly practical and insists that her impressive skills are the main focus.

As the audience enters, Farrett sits with a cardboard box on her head labelled, “LadyFace.” She munches crisps and sips fizzy juice, tapping her feet along to the intro music.  To her right is a clothes horse piled with more boxes, each labelled with the name of a character.  As the music fades, Farrett leaps towards the boxes and swiftly dons two black bags, one over her torso and one on her head.  As ‘Ann Cotton,’ she recites a grimly funny poem about her plague symptoms.  The music starts again and, dancing all the while, she swiftly removes her makeshift outfit and selects props from another box.  Abruptly the music stops and she’s an outwardly together woman taking out all her frustrations on her poor dog.

Farrett proceeds in this breathless pace for the entirety of the show.  We’re given a brief snippet of character before another quick change.  Then she hurls herself into a different persona.  It takes some time to get to grips with the rhythm, as the purpose of some characters isn’t initially clear.  It’s only on their second outing that you realise there’s a narrative being established for each.  With each appearing three or four times, it’s remarkable how nicely their stories are established with these broad strokes of character.

As a method of storytelling, this jigsaw approach works really well, although you do end up yearning for certain characters to come back round more quickly.  Her take on Audrey Hepburn, presenting demonstrations on how to perform such trivialities as eating an apple and unwrapping a present, is sublime; demonstrating some lovely comic timing and a gift for different voices.   Also great is Geraldine, appearing through history to warn the likes of Ceasar to stay at home one particular day in March, and King Priam to be a bit wary about that wooden horse.  “I’ve just got a bad feeling,” she hisses through clenched teeth.

Also taking in a vengeful Barbie, a spoiled little rich girl, a cat that has become a reluctant YouTube star, and a slow-witted but loveable eccentric named Jade, LadyFace is a rich and varied show that examines many aspects of femininity.  It’s often gently amusing rather than hilarious – although each character has at least one brilliant moment – and in the character of Jade there is room for a genuinely sweet and heart-warming ending.

Lucy Farrett is a real talent, and LadyFace is a nicely written and constructed piece of wit and charm.