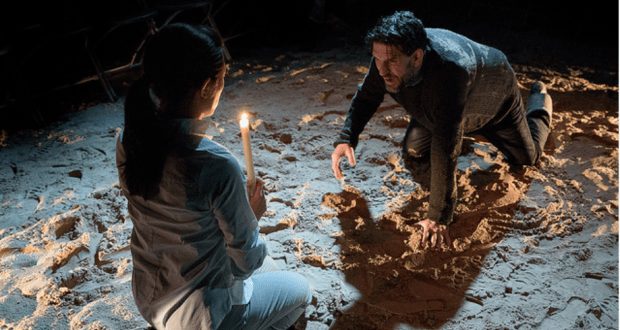 Named after the Italian crossing which is now a primary entry point for migrants crossing from Africa to Europe, this a revival of the highly political 2015 play by Anders Lustgarten.

Presented as a series of intercut yet unrelated monologues (narratively, at least) Andy Clark is first on stage as Stefano. As a former fisherman who now reels in “a very different harvest” of dead migrants, Clark is initially a rather calm, stoic presence. His description of warped bodies peeling apart in his hands is grim and sets the tone for what is to follow. Indeed, as things progress he gradually becomes more manic, wracked with guilt and almost drowning. It’s a nuanced performance and a powerful one. Clark’s accent at times makes several of his points about the downtrodden state of Italy (right down to an under-performing national side) sound like they could apply to Scotland. This may not be intentional, but it’s a not unwelcome side effect.

However, he’s upstaged by Louise Mai Newberry as Denise, a half-Chinese University student who works as a debt collector to finance her studies. “Mixed, mouthy and poor”, she is a rather unnerving figure – fiercely determined and driven by sheer anger at various points. Moving around like a caged tiger, her addresses to the audience have an edge of intimidation to them. However, in the story of her relationship with her mother, a far more wounded side is revealed. There is also a hint of sexuality as she describes her new found immigrant friend’s accent as “quite sexy, actually”.

Staged in the round amongst sand, this setting does seem rather bizarre in regards to Denise. Is the suggestion that the whole world is essentially one giant Lampedusa, where different peoples will always meet with others? As Stefano and Denise become thematically linked, their travels on and off stage reduce until they are inhabiting the same space, invisible to one another as they perform. Fittingly they silently meet in the middle, embracing in a spotlight during a final fade to black. It could all have been so clichéd and hectoring, but it deftly avoids being either.

The same applies to the politics; from the UK benefit system to the Italian political scene, this could have so easily proven to be an exercise in lambasting the audience. Pleasingly it most definitely stays in the side of drama as opposed to diatribe. Although only two years old, Lampedusa feels strangely out-dated in one major way: Brexit does not cast its shadow over our players. They may feel they are “fucked” but little do they know things can only get worse.