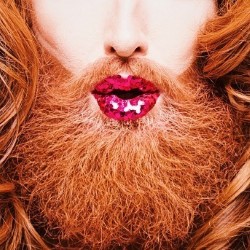 After the venue’s fire alarm went off last weekend, flinging the entire audience, staff, and cast into the absolute pissing rain for an hour, The Late Night Lip Service crowd were, in some cases, literally wet through, but their enthusiasm not dampened in the least.

Exhibitionists beware: the standard for audience participation here is staggeringly high.  The “lip sync for your life” moment (which, as any drag aficionado will tell you, is a lip sync battle – two performers, one song, one winner) unearthed some gobsmacking talent in the aisles, and similarly, an audience catwalk went quickly from strutting into vogueing to waaking (the younger, blacker cousin of the vogue.)  Only venture stage-ward if you’re prepared to be vastly outshone.

When the audience wasn’t stealing the show, it was screaming its collective face off in mass-scale approval of it. Because Late Night Lip Service is stellar.  Part of the hype last weekend was Calvin Arsenia, the Kansas City folk-harpist that many had come especially to see. This young man’s dulcet voice, so smooth and impassioned, vibrates with feeling, is at once commanding and intimate. Arsenia brings this resonant and highly individual folk style to pop classics like Britney’s Toxic and in so doing lends them a gravity and depth that is quietly moving.  Queer pop club icon Johnny Woo was another hit, his catchy song “Faggot” subverts the slur hilariously, and perhaps captured the mood of the night, which felt like a genuine celebration of Queer and femme culture. Danny Beard, exemplifies “genderfuck” drag. The Honey Farm, three young Scottish MC’s, completely own the stage, reminding us, as Scotland’s only all-female act, that that the political can be not only personal, but hilarious. It’s the LGBTQ positive vibe, and the positive vibes generally, which unite these fairly disparate acts. That, and of course, Gingzilla.

Gingzilla is compelling, in and out of a variety of excellent outfits. This bearded beauty has a killer voice of their own, equally at ease with the beefy vocals of Immigrant Song or with softer, more feminine pop numbers like TLC’s Waterfalls. The flamboyance escalates from one bombastic entrance to the next, in and out of a dazzling array of highly creative outfits, which sometimes leave little to the imagination, but always demonstrate a lot of it.

A seriously uplifting show, which, this weekend will feature Cazeleon -cabaret camelion, Australian drag circus Yummy,  and Tilda- actual-Swinton, amongst others.