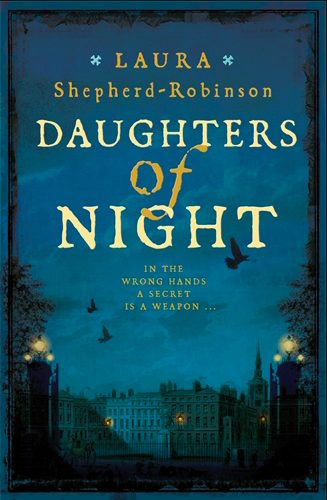 London in 1782 is for one section of female society a seemingly endless parade of social engagements in the finest gowns with just one aim – to find a husband. The London in 1782 for another section of society is one of debauchery and servitude with just one aim – to find a keeper. In Daughters of Night these two worlds collide as the demimonde of prostitution entangles with the ‘Beau Monde’ of London society. All have their secrets and as the opening line of the novel tantalisingly suggests, “in the wrong hands a secret is a weapon.”

Protagonist, Caro Corsham, has a secret of her own she is trying to conceal as she heads to the bowers of the Vauxhall Pleasure Gardens to consort with someone who might be able to help. What she finds, however, is a murder which will subsequently lead her into a terrible tangle of corruption and deceit which will put her own, and many others’ lives, in mortal danger; not to mention the scandal. With the Bow Street runners turning a blind eye to any wrongdoing, Caro enlists the help of thief-taker, Peregrine Child, to discover the truth.

Laura Shepherd-Robinson’s research of the time period is second to none and the reader is therefore entirely transported into the late 18th century and into the novel’s web of lies. As every new secret is unveiled suspicion turns to a different character and the reader attempts to play sleuth alongside Caro and Child, but Shepherd-Robinson has weaved far too clever a tale to reveal her secrets too early and it is not until the very end (and really the very end) that the reader learns the whole truth.

The twists and turns just keep on coming in this beautifully descriptive yet completely unapologetic novel – an introduction to mouse fur eyebrows one of the particularly toe-curling passages – and yet it is these details which show the reader the depth of research an accomplished author must go through to create such an authentic depiction of life at the time.

Daughters of Night has everything a historical crime thriller needs – intrigue, attention to detail, suspense, colourful characters and heroines a plenty. A triumph in its field.