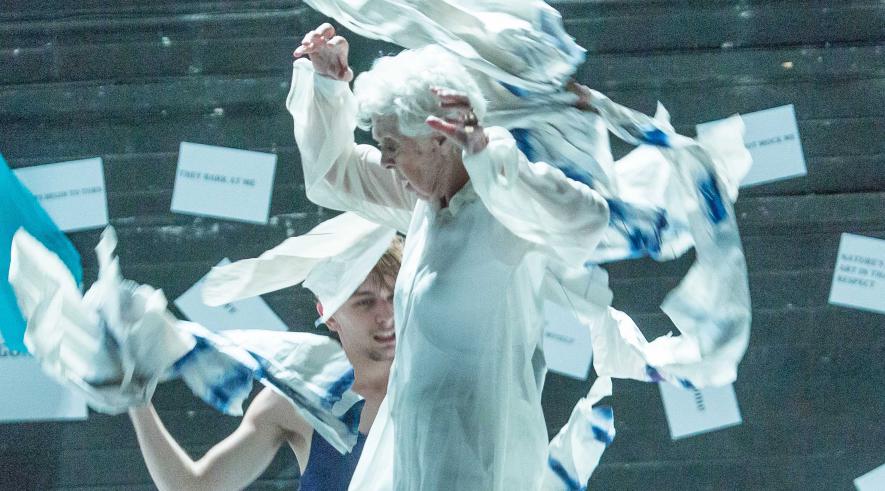 A supreme marriage of Shakespeare and modern dance

Founded in 1991, John Scott Dance seeks to build its company from a deserving lot – international dancers, some survivors of atrocities. Their work is often praised for its inclusiveness and diversity, along with its sense of wit. With Lear portrayed by exceptionally captivating Valda Setterfield, postmodern dancer, it’s a promising start to the production.

The number of adaptations, interpretations and confusions about Shakespeare’s King Lear are plentiful. However, change too much and it is stripped bare, with no recognition for the original. Not enough? Then what was the point? Instead, John Scott Dance reinvigorate the story through another medium, dance. Far more of a contemporary movement piece, there are still aspects of traditional ballet. The trio of daughters/fools’ precision timing is evident in their simultaneous allégros.

The real surprise of this production is just how funny it is. Never has King Lear japed so fondly at the French. There’s a lot more physicality than in a traditional telling, which helps boost tension. Setterfield’s Lear is compassionate, the worrying aged parent who nags and phones their daughters out of love. Her take on Lear is touching, the death speech instead substituted for a slow paced dance, something far more powerful.

With genderblind casting, the position of daughter Cordelia falls to Kevin Coquelard, who is nothing short of spectacular, acute in his leg work, free flowing when required. The emotion he conveys both facially and vocally would be the envy of most performers. The energy tightly bound inside Coquelard – in fact, all of three daughters – explodes when necessary.

The madness of King Lear, whilst never officially documented is often expressed as stages of dementia. Commentary present in Setterfield’s Lear is both subtle but clear. Throughout the performance, segments of the text have been glued to the wall. The finale, a literal whirlwind of Lear’s “madness” is manifested in jeers of “old” and “forgetful”, the pages of Shakespeare’s text torn asunder. The three male performers taunting Lear, whose throne is now a wheelchair, dance amidst the ripped pages. Finally, Cordelia, wrapping Lear in “blankets” of the past and comforting her King, collapses with her sisters amidst the forgotten words.

Merging the rubber face of comedy with that of stone-faced tragedy, creates art at its purest and most supreme. Like this marriage, the coming together of Shakespeare and John Scott Dance creates a masterpiece of movement, emotion and chaos.