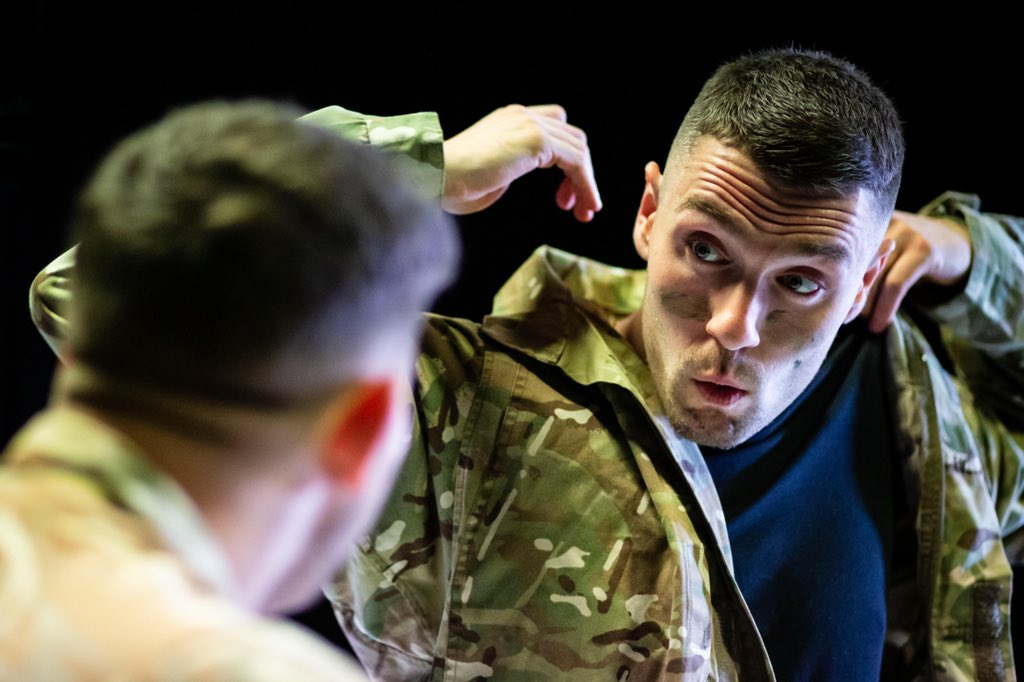 Hidden away in Tesco’s disabled toilet, two young men are preparing for war. As the play begins, they pull on combat fatigues; there are guns in the wash-hand basin, and an ominously bulky backpack on the floor. Be in no doubt, these are domestic terrorists, ready to die in a blaze of devastation. But they’re also men you’ll come to like – and more importantly than that, to understand.

The army gear suits the stocky, commanding Bill, who’s clearly the architect of the imminent attack and who’s pumped up for the horror about to unfold. His lifelong friend Tink has followed unthinkingly – and is only just beginning to internalise exactly what Bill’s plan entails. Bill is certain they’ll die as heroes, while Tink isn’t sure about dying at all. Yet as the clock ticks down and the men share final thoughts, it’s Bill who begins to crumble.

For a while the situation seems comically ridiculous, and there’s plenty of dark humour to open Sarah Nelson’s script. But the tone shifts once we learn what’s driving Bill: the deep-seated trauma planted in his childhood, which translates now into rage and nihilistic despair. As he swings from machismo to terror, then to harrowing bottomless pain, his body’s consumed by trembling and his mind by guilt and regret. It’s a truly exceptional performance from actor Sam Glen, who makes each lurch and every nuance utterly convincing.

Playing Tink, Jordan Reece is initially Glen’s foil – but towards the end Tink steps out of Billy’s shadow, to deliver an eloquent monologue and the most urgent message of the play. Tink’s motivations are less personal than Bill’s, more political in a way; but there’s something in his past that shapes him too, a formative experience that demands our compassion.

The tragedy of Letter to Boddah is that Bill and Tink can tell each other anything; there’s deep trust between them, rooted in shared experiences and common pain. But it’s taken this extremity – the seeming imminence of their deaths – to release the thoughts and feelings they clutch so tightly to themselves. If only they’d talked like this sooner, perhaps they wouldn’t have arrived at the dark and twisted place we find them in.

With a powerful script and two gut-wrenching performances, Letter to Boddah is a study in grim reality – and a masterclass in tension too.  For there is still hope for these brothers-in-arms, and for the staff and shoppers they’ve planned to slaughter.  The toilet is a confessional, their conversation is a therapy; we can see them change and soften before our eyes.  They won’t go through with it.  Will they?