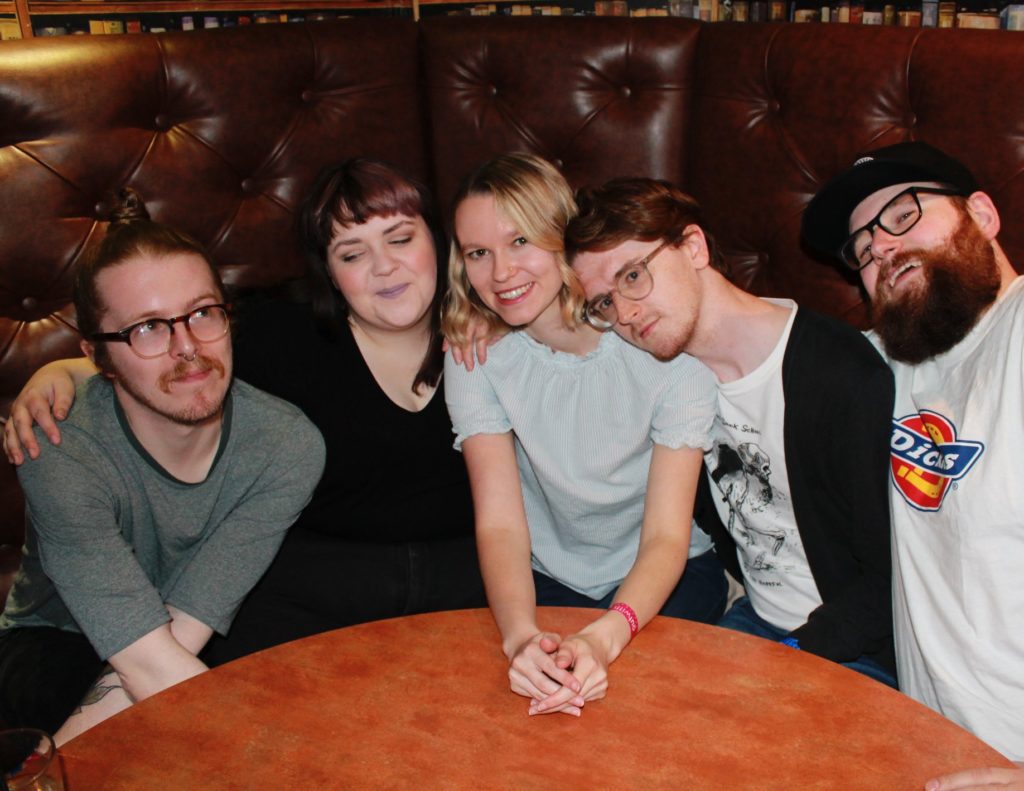 “Music has been my gift…live in the moment, forget yourself.” – Kathleen MacDonald

TRNSMT? More like TRNS-WHIT? The real show in town is not in the east but across the water in the southside at The Glad Café.

Label mates Deer Leader and Life Model bring the noise to Shawlands. The former bring the cinematic soundscapes of their debut We’ve Met Before, Haven’t We? followed by Life Model who are finally (a pandemic-induced year late) able to showcase their scuzzy dream pop.

This is also the first gig back for the refurbished venue, which has taken some extended time to give itself a lick of paint and a new Covid-friendly layout.

Taking the stage bang on 8:30pm in front of a capacity crowd, and to the spoken word of Kathleen MacDonald – the folk singer beautifully recorded on the record – the band launch straight into album opener We’ve Met Before…

Every note of the set filled the intimate space with singer Robin Pringle’s vocals reverberating over some soul shaking synths and rhythm. With little in the way of chatter or patter between songs, the five piece let their songs do the talking. The crowd are happy too with many a bobbing head and tapping foot to be seen.

Credit must go to the sound engineer who manages to harness three guitars, a bass, synth and drums on such a small stage. Occasionally the vocals get lost but that is more to do with the epic scale of the songs being performed.

Latest single The Loaning is perhaps the highlight of many from the night’s work. It’s wistful-yet-aspirational lyrics sum up where this band are right now. They are ready to take the ball and run with it, hopefully to grander stages and bigger crowds:

After an impressively quick turn-around, Life Model step up to meet their, by this point rather merry, audience.

The five members immediately look comfortable on stage and, led by guitarist/producer Chris Smith, display a confident air in their performance, which propels the set. Lead singer Sophie Evans has such a gentle vocal which remarkably rises beautifully above the dreamy-post punk music, allowing us to enjoy their romantic/angst laden lyrics.

“And I’d change if you’d ask me too” sings Evans over the pop-perfect Saskia, while on new single Sit Still: “You brought out the best of me…you took what’s worst of me and what’s left of me is fear, contempt, disaster and misery.”

Special mention to the rhythm section, which flits effortlessly from bouncy pop to punchier rock ‘n’ roll. The energy from Cameron McDougall on bass demonstrated a sense of fun, confidence and perhaps relief shown by the group after such a long layoff from performing live. An effect which clearly overflows to the front row and specifically the steamer intermittently bouncing off my shoulder throughout. I’m going to assume it was a proud family member but either way, the music is too catchy to get that bothered. Long may live music be enjoyed once more!