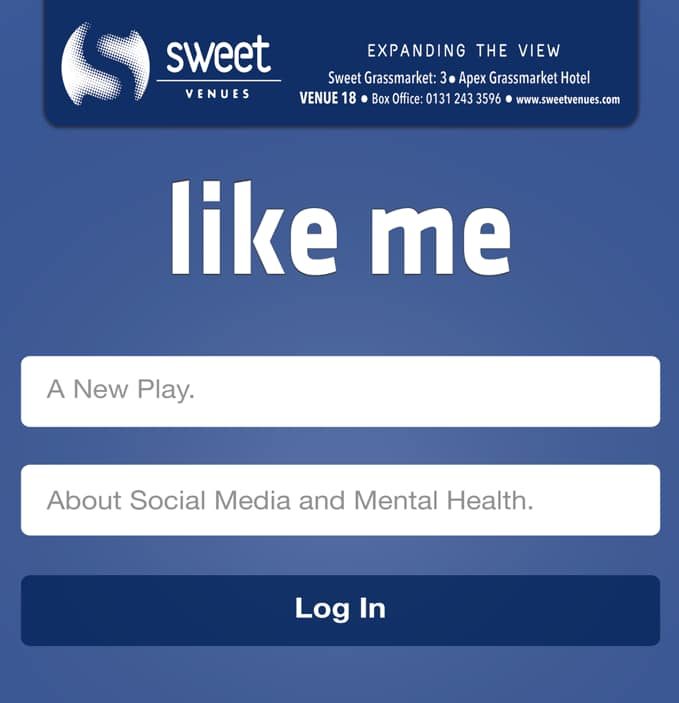 Part talk, part play, a thought-provoking primer on the pressures of social media

Like Me is an unusual piece of theatre. It is theatre – a monologue, delivered in character, by someone we come to know and care about – but it’s almost a lecture too. Aimed at those of us who lived our childhoods before the rise of Facebook, this is a primer on the pressure social media exerts on the young: a millennial addressing the older generation, and telling us we don’t understand.

In an unusual gambit, the non-gendered script is performed by both male and female actors on alternating days. On the day I attended it was Hannah Spencer’s turn, and the staging couldn’t be simpler; it’s just her, a chair, and an all-important phone. True to stereotype, Spencer fiddles with said phone throughout the performance, while a TV to the side of the stage cleverly shows us a realistic mock-up of the Facebook pages she’s browsing.

The obsession with her phone is distancing, but the listlessness has a point: it captures her perpetual fretfulness, her anxious wait for the online responses that have come to define her self-worth. We see the rush of pleasure when the likes come in, but we also see the anxiety and paranoia that accompanies an unexpected silence. As the messages come up, we start to recognise subtexts and back-stories – an intriguing device which helped connect us to the character, and deserves to be developed a whole lot more.

Part of it’s a masterclass: a primer on the etiquette of the social-media age. We learn about how to cull your friends list, when to send a message and when to send a post, the importance of changing your profile picture regularly (but not too often). Each lesson is delivered with a healthy dollop of cynicism, and a thinly-veiled disdain for those who can’t or won’t play the game. At one point she brings up the profile of a childhood friend who, in her words, has ‘given up’; to me he looked a perfectly nice chap, but as she digs through and comments on his profile, we start to understand how instant judgements can form in the information age.

‘Twas ever thus, of course. Some kids know how to be cool, some kids want to be cool, and some kids genuinely don’t care. But Like Me successfully explains that it’s different now: it demonstrates the unique new challenges of living your whole life in a goldfish bowl, while leaving a permanent record of everything you do. Liking a post ‘doesn’t cost you anything,’ Spencer explains. But in the end, as we witness, there’s a price to be paid.