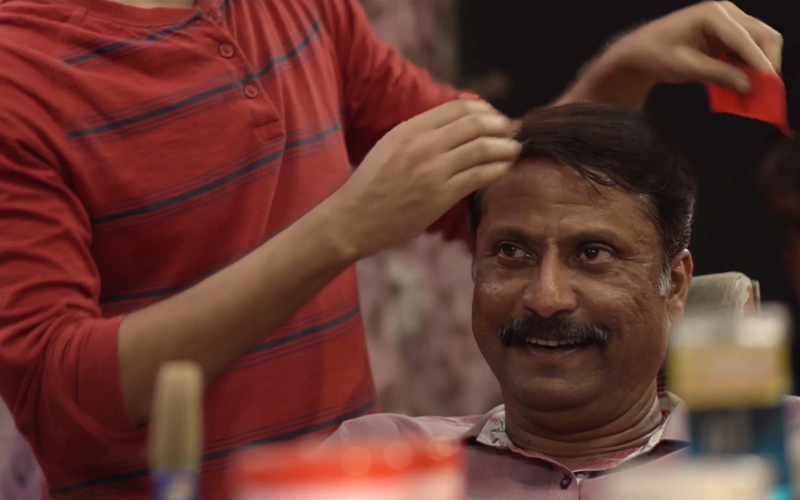 Hands and Wings (dir. Sungbin Byun, Republic of Korea, 2019) begins the short film collection Love or Something Like It and should perhaps come with a trigger warning regarding sexual abuse. It’s an arresting piece, shot in black and white, that creates extreme discomfort in its depiction of a mother masturbating her disabled son, Woosung, and raises various questions about consent, abuse, sexuality and disability. Woosung’s mother realises her son is gay but clearly wishes to stifle this, insisting he will meet and marry a beautiful woman one day. Meanwhile, Woosung fantasises about a man in an angel costume he met on a beach once. The wings of the costume become an extended visual metaphor and the film’s act of assault can also be read as a symbol – a representation of parental and heteronormative pressures on children and the cruelty of this.

The room between her and her (dir. Yujie Cao, China, UK, 2020) is far more conceptual but deals with similar themes of influence and oppression. The film is a combination of art installation, animation and performance art with two actors moving within a dark, surreal space littered with children’s toys and TVs. There’s no narrative here. Instead, we are presented with abstract impressions of formative childhood experiences, the power of media, authority, and sex. It’s difficult to extract any concrete meaning but it’s a fascinating sensory experiment playing with bizarre visual and aural juxtapositions.

Haiku From a Dead Poet (dir. Akira Kamiki, Brazil, UK, 2020) is far simpler, yet purer and more emotive. It’s a spoken-word piece recited to still images captured on a phone camera. The narrator, in beautifully subtle poetry, describes his longing for a partner left behind in his home country of Brazil before emigrating to London. It’s a touching portrayal of grief, romance, and change, and impressively stands out in the collection.

SUNDAY (Dir. Arun Fulara, India, 2020) is similarly gentle in tone. It focuses on Kamble, an Indian man who delights in his weekly visit to the local barber, Jaan. The handsome young man welcomes him in each time and through lingering closeups the film explores physical intimacy, focusing on the sweetness and vulnerability of touch rather than sexual titillation. It’s a sensitive look at repression and homosexuality in a constrictive society and the performances here are careful and warm. The emphasis on hidden joy as opposed to overt pain is also refreshing.

The collection closes with More Than Two (dir. Dan Dansen, Germany, 2020), the longest of the films at 35 minutes, and a disappointing end to Love or Something Like It. It’s a quasi-Call Me By Your Name, following a couple and their friend arriving in a summer holiday home and coming to realisations about their true feelings and what the boundaries of their open relationship are. The narrow storyline doesn’t merit the runtime and it’s difficult to invest much in the characters, about whom we learn very little. Most of the film consists of improvised dialogue and lengthy exterior scenes without much action, climaxing in a physical tussle that all feels a bit pointless.

Most of the content of Love or Something Like It is engaging, either through use of intriguing visuals or sensitive performances and subject matters. SUNDAY is a highlight and there are various styles at play to cater to differing tastes. It’s a strong collection overall, marred slightly by an anti-climactic finale.