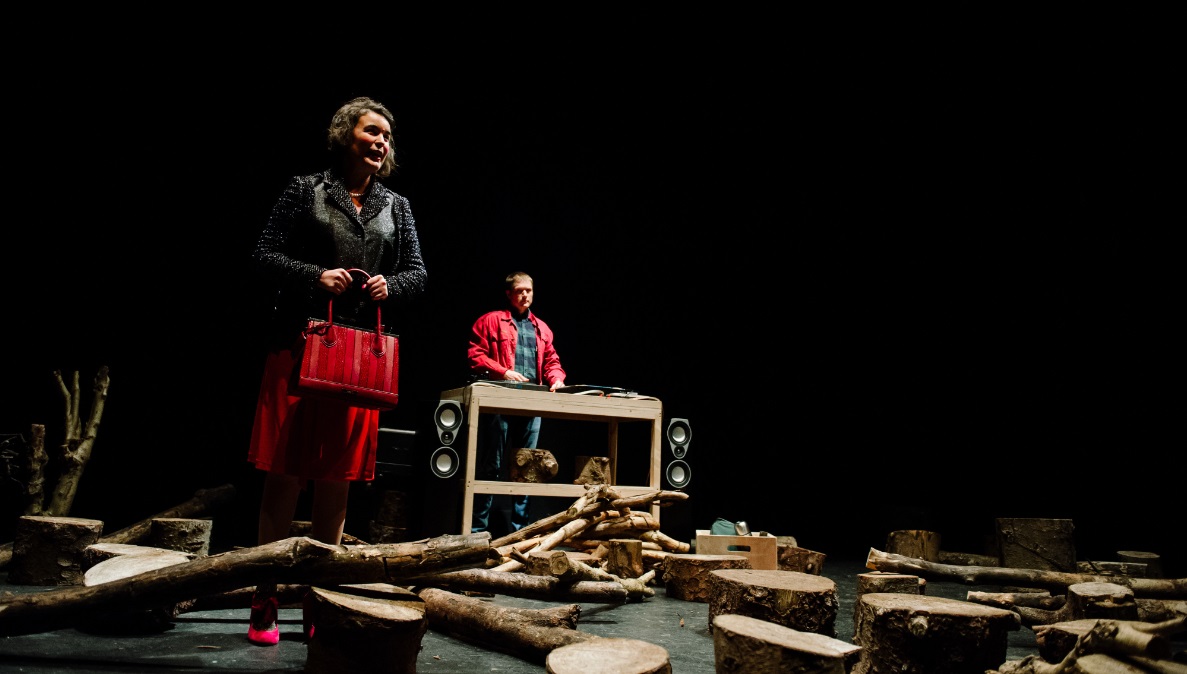 Overbearing symbolism inhibits any sense of clarity in this satirical play about the British workforce.

Manpower by Two Destination Language seems to be replete with symbolism. What the play wishes to convey behind this symbolism, however, is not clear.

The stage begins in darkness. A man describes the importance of a quality cable to convey the full complexity of the sound from the record turntable to the speakers. Beautifully precise lighting gradually fades up until he is fully revealed, brandishing his vinyl. He talks about the importance of purchasing the heaviest weight record and the best quality recording equipment. A good quality record will be failed by the sound system unless you invest, he mourns.

The man is standing behind a table which supports the aforementioned sound system. The rest of the stage is littered with planks of wood, some trussed into bundles and lots of tree stumps. A woman enters dressed in a red dress, a sparkling black jacket and matching accessories. She looks delighted to be here. The man gives her a microphone. She puts it in her handbag, clambers over the various planks and stumps, exits, returns with a lecturn, clambers back over the stumps carrying it, plants it in a gap, sets up the microphone and begins a trot through the past four decades of British history, delivered in euphorically satirical tone.

This is a devised piece, created by the two actors, Alister Lownie and Katherina Radeva. They explore the factors that make people different. Katherina catalogues the waning industrial Britain, the rise of capitalism, the impact this has had on the jobs that men could (or would) do and the effect that all of this had on their self-perception. At the same time, she observes that she arrived in Britain just over 19 years ago, an immigrant in search of work, and made a successful life for herself  – doing the jobs men were no longer doing – until Brexit interfered.

Her monologue is scattered with some amusing one-liners – she describes Tony Blair as the Prime Minister who got elected because he smiled more than the other candidates. It is accompanied by Alister’s assembling of the planks scattered about the stage into the frame of a house, resulting in an impressively solid-looking structure. The premise of this show is interesting. When the economic and political landscape is more than capable of pulling the rug out from under you at any time, what does that do to your sense of self?

The clue is possibly in the show’s title: with the growth of an economy that’s no longer founded on physical strength and endurance, where does that leave a man who wants to be stronger, better, more informed – even if only about sound systems to outwit opportunistic shop assistants trying to upsell kit?

Alister concludes the piece by assembling the tree stumps into a wall that divides him from the enthusiastic lecturer. But why? Because he wants to keep her out because she’s taking his job? Because he feels she challenges his masculinity with her resourceful capability? Because he is Scottish and she is Bulgarian and the two can’t live in harmony? Or because Brexit is a-coming and there will be casualties? No answer is given.

There is plenty of food for thought here. Yet the characters portrayed, perhaps in the name of the satire, are so one-dimensional that it’s hard to feel either sympathy or empathy with their circumstances. Verging on caricature, are we to believe that Bulgarian women only wear bright accessories and talk in shrill voices while men only like making things?

This script contains many interesting observations about the nature of masculinity in a changing society and a changing economy. But a bit more interaction between the characters would leave it feeling less like being on the receiving end of a history lecture while a man builds a house in the background.