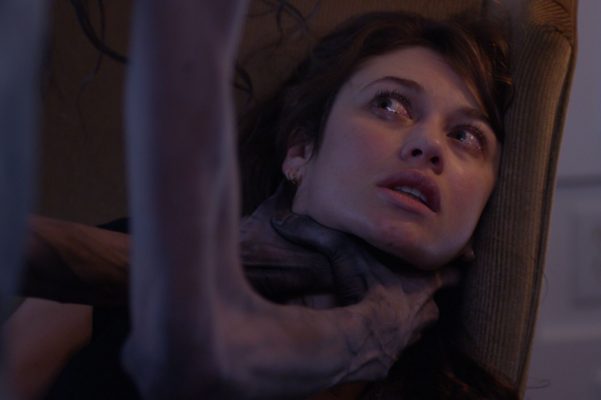 According to an intertitle at the beginning of Clive Tonge’s Mara, 40% of us suffer from sleep paralysis at some point in our lives. Sleep paralysis occurs when the limbic system is erroneously triggered due to mind and body not operating in sync during the process of falling asleep. The brain has released a signal to relax the muscles and put the body into suspended animation, but the mind remains conscious so the sufferer experiences the sense of being paralysed. It used to be thought that a creature called a ‘night-mare’ or sleep crusher would sit on the chest during sleep. The condition is not usually considered serious beyond being terrifying but is a phenomenal basis for a horror film. Tonge draws on the heritage of artworks like Henry Fuseli‘s The Nightmare and more than a little from modern J-Horror, yet is not able to conjure either the atmosphere or the dread of his superior sources.

Criminal psychologist Kate Fuller (Olga Kurylenko) investigates the alleged murder of a man by his wife. The woman, Helena (Rosie Fellner), claims she did not kill her husband, but that a demon known as ‘Mara’ broke his neck while he suffered from a bout of sleep paralysis. Kate signs off on Helena’s committal to an institution but after seeing a tall, spindly figure that matches the description of Mara during a similar attack of paralysis, she begins to investigate deeper. She soon discovers Mara has a long history and the sleep demon has marked her as a target.

Clive Tonge has borrowed not only some character design from modern Japanese horror for Mara but pretty much the entire plot for Ringu has been superimposed over the idea of the sleep demon. Not only does this mean that every plot beat can be easily predicted, but every superior aspect of Hideo Nakata‘s creepy, eccentric classic peers through in palimpsest. Poor Olga Kurylenko does her damnedest as a tenacious woman driven by empathy and guilt, but Kate is just not a rounded enough character to get engaged with beyond that of the standard trope of a competent female professional dismissed by arrogant male authority. A generic story requires some sharp characterisation and Fuller fails to live up to the name.  Genre mainstay Craig Conway fares better as the sleep-deprived fellow sufferer, and exposition dump, Dougie. He offers a few moments of unpredictability, including possibly the one genuinely horrific incident in the entire film as he takes extreme measures to stay awake.

Spanish actor Javier Botet plays Mara itself and will be a familiar shape, if not face, to contemporary horror fans. He suffers from Marfan syndrome and has become the go-to for any director who needs a tall, thin and uncanny actor with an eerie, twitchy physicality. You’ll have seen him in [REC], Mama, IT,  and Scary Stories to Tell in the Dark among many others. Perhaps this ubiquity is why the character design fails to be as terrifying as it should. Just as the scares provided by the spectres of lank-haired East Asian girls gradually faded through familiarity, Mara is too similar to the Big Toe in Scary Stories… and the titular Mama to prickle the same hairs on the same necks. This is not a failure on Botet’s part – the actor is still a superb physical presence, just a combination of uninspired writing and design.

For all its mediocrity, Mara still passes the time effectively enough. The central issue can be summed up by a character who evokes Freddy Krueger as the figure he would see suffering from sleep paralysis as a child. If you’re going to reference the granddaddy of parasomniac horror, you need to raise your game accordingly, and Mara is just painfully ordinary.