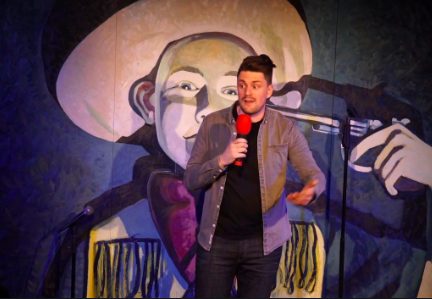 Marc Jennings has titled his debut solo Fringe show, Getting Going, and it’s a pretty apt title. There is enough in this hour to give the audience a taste of what might be to come. Perhaps the small crowd in what Jennings describes as a “wardrobe” at The Stand are seeing a comedian who in years to come will be a household name.

Jennings began his road to success online, uploading a clip of his stand-up that has received over two million views. Unfortunately (or fortunately depending on how you look at it) this clip was based on criticising his job in a call centre that he has subsequently left (or “stood down”). This just gives him even more material though and together with the ironic Shakespearean tragedy tone his life has taken he has put together this hour of jokes.

Like a lot of comedians he has a self-deprecating style and most of his material comes from what he considers his personal failings. He pulls it off but needs to strike a better balance between his one-liners and his more observational style storytelling, or just decide which one he feels most comfortable with.

That said the young Glaswegian has a neatly packaged show, making no apologies for his accent and opening and closing his set with some accent based humour which works well with this particular crowd. It is not lost on him, however, that a more English audience might need subtitles, or worse, replicate his experience from last year’s Edinburgh Fringe when he was mistaken for a workman rather than a performer!

As the title suggests, Jennings is ‘Getting Going’, building up his profile and trying to crack the Scottish stand-up scene. On this evidence he is well on his way, making some astute observations which are right on the money. His description of the festival as a middle class Magaluf is particular memorable. He’ll be back – hopefully somewhere bigger than a wardrobe!