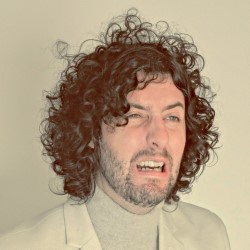 Matthew Highton’s relaxed conversation style is well suited to the small cozy room at Dragonfly. The layout of the venue has been changed since last year, and it works a lot better as a performance space now. Highton is quite slow paced, but his charm and easy manner give him great stage charisma.

There’s a lovely, gentle start tonight, as one audience member boldly takes advantage of the coat rack at the side of the stage. This leads Highton to offer a valet cloakroom service to every new punter as they enter. It’s a silly bit of improvised business to fill the time until the show proper, but it really works well to set the tone for Highton. When he eventually does take the mic, he’s already on positive karma with the crowd.

Highton’s grandmother is suffering with dementia, and it’s this illness that has served, indirectly, as the impetus for Insufficient Memory. There are a handful of specific memories that his grandmother retains, and regularly relives. Highton’s aim is to identify some of his own favourite memories, and perhaps to make some new ones that will prove just as persistent.

When he’s on comfortable ground, Highton is very good. He’s witty and engaging, and the handful of characters that he introduces us as part of his tale quickly gain dimension. Highton’s comedy is rarely too adventurous, and while his crafted jokes are strong, the show feels a bit hamstrung by its own narrative. The central concept – heartfelt as it unquestionably is – feels artificially imposed, and Highton struggles against it sometimes. One often feels that it’s more important to him to tell the full honest truth in an anecdote than it is to get to the joke.

Not all of his stories end in a strong enough punchline to really justify their inclusion, but the best of them are excellent, eliciting genuine guffaws and belly laughs from the crowd.