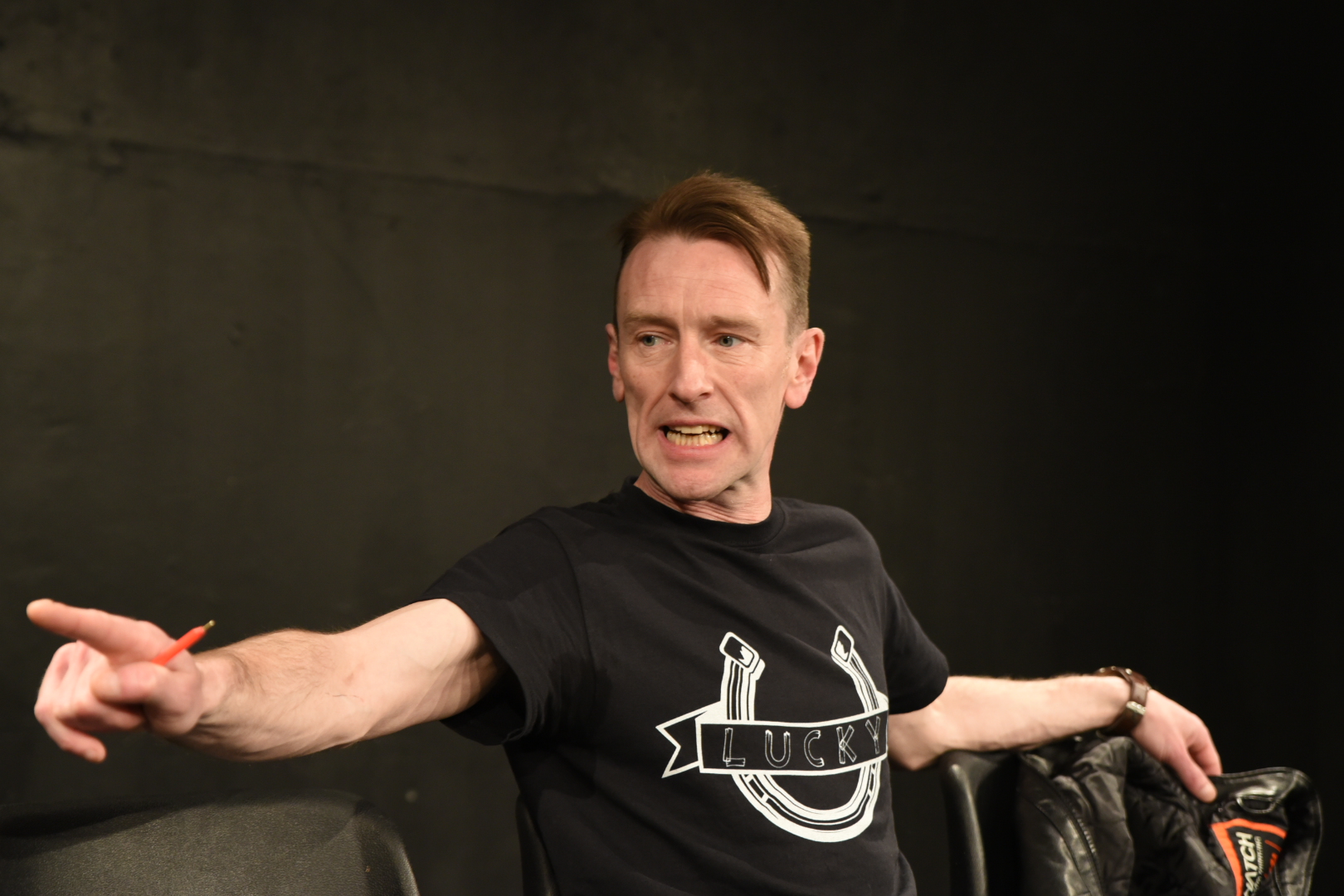 If you’ve ever seen the landmark Seven Up documentary series, you’ll know Tony, the chipper East End geezer whose happy-go-lucky attitude gets the stuffing knocked out of it by grief, and by the frustrations and disappointments visited on him by his life circumstance. He grew up on a council estate, trained to be a jockey (which didn’t work out), tried his hand at acting (with only modest success), and lost people he loved at a young age. Proud cockney to the bone, he won’t apologise for who he is or doff the cap, but all the while knows that his lowly birth is limiting his ambitions.

McLuckie is a Glaswegian Tony – a kid from the schemes, where people die before their time. He couldn’t cut it as a jockey either and found his calling as an actor (although he discovered the going is tough in that profession too). When we meet him, he’s in his 40s, out of work, on an oncology ward and about to start treatment for cancer. Mortality is on his mind.

Martin Travers and Martin Docherty’s one man play doesn’t journey very far – either dramatically or in terms of location. It doesn’t need to. Everything’s contained in McLuckie himself, here in this corridor, running through his past, present and (potentially limited) future in his mind. His train of thought rolls along naturally, extrapolating from memories to work out where he is now – unemployed and out of luck – and where he may end up. Even the best of us end up as a “heidstane being pished on by a dug,” he says.

Docherty attacks the role of McLuckie in rich, confident, V-flicking Scots. The character himself is disdainful of BBC English, and of those who wield it for power by othering the linguistically non-compliant – the agent who refers to him as “Scotch”, the casting directors who “want a bit of rough”. But the play itself also stands as a rebuke to this neo-colonial attitude. In a meta moment – the play’s most revealing – McLuckie bemoans the lack of theatre that has a real social heart, as opposed to poverty porn for the cosmopolitan theatrical set. McLuckie’s Line is exactly the play he’s bemoaning the lack of.

That heart and soul shows itself in beautiful, tragicomic vignettes that paint working-class lives as full and enviable, not something to be pitied. When you die young on a scheme, it’s the closest you get to immortality, McLuckie says, conjuring up a vivid image of a friend’s funeral that sets all the estate talking. And when he remembers the smell of his granda Pawney from the late man’s bunnet, it comes across so strong, clear and dewy-eyed, this could be all our grandas.

Docherty gives credence to McLuckie’s skills as an actor with deft impressions of characters in his stories. The pipe-smoking Scottish racehorse trainer and the plummy-voiced drama school teacher are two that leap out. Pedants may scratch their heads at what seems like a conflation of flat racing and jump racing, or may find themselves totting up how McLuckie and his granda’s timelines fit together, but only because attention to detail is strong elsewhere.

The “line” of the title has multiple meanings – a betting line, a line in a play, at one point it’s a line of coke. It’s also perhaps his life’s line, unveiled before us in these reminiscences, and maybe about to come to a halt. Like the aforementioned Tony, McLuckie would make a good subject for a documentary. There’s much to him and his frustrations are easy to identify with, unless you’re one of the tone-deaf theatrical establishment he’s struggling against. In fact, that is the only major question hanging over the play. Its stated aim is to “appeal to people who would normally think going to the theatre is not for them” and in many ways it does, with its cringe-free use of Scots and its elevation of ordinary lives to something worthy of performance. But how well does the rather introspective commentary on theatre culture sit alongside that?