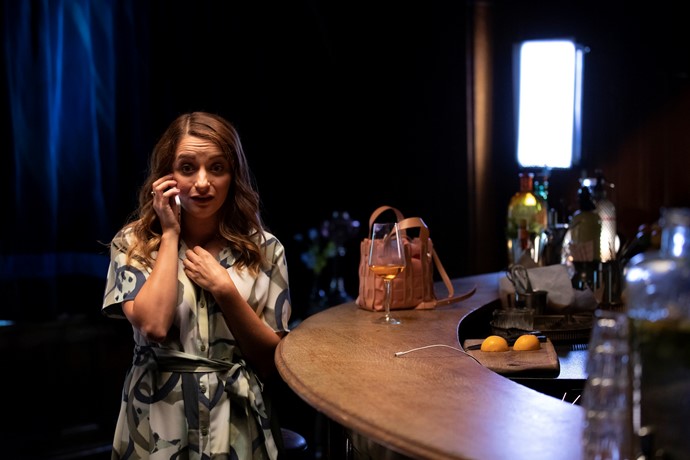 My Light Shines On: The Telephone

My Light Shines On

There’s a reason we’re asked to turn off our phones before a live performance, and The Telephone shows us precisely why. Filmed under lockdown conditions at the King’s Theatre in Edinburgh, Scottish Opera presents a contemporary take on Gian Carlo Menotti’s 1947 piece. Reminding us all of the company’s innovative potential, this short film seeks to connect with a new generation of opera lovers, bringing together 21st-century technology with a centuries-old art form.

This adaptation provides a relatable story of unanswered love, phone chargers and cocktails, while using all the melodrama akin to opera that they can muster. The Telephone finds friends Lucy (Soraya Mafi) & Ben (Jonathan McGovern) meeting for a quick drink before Ben departs for London. With love on his mind, Ben wants nothing more than to confess his feelings for Lucy. Unfortunately for Ben, Lucy is too blinded by her dying phone signal, frustratingly focusing on everyone and everything else except him.

While we are not able to go to the King’s Theatre ourselves, it’s wonderful to see the beloved venue framed in such a rich and diverse series of cinematic angles. Carlo D’Alessandro’s direction of photography elevates Scottish Opera’s film away from solely being a piece of orchestrated melody, instead making it an exceptional short film of its own volition. D’Alessandro and director Daisy Evans capture the heart of both mediums, with the grandeur of opera measuring up to the intimacy of film – though maybe leaning a little heavily on the lens flares.

The film and opera’s shared intensity sells the performance in a compact experience: where an opera traditionally has hours to lay out a spectrum of emotions, The Telephone achieves an equal amount of sentiment in under half an hour. By opting for a contemporary retelling – integrating the reliance on phones, messaging apps and Instagram references into the narrative – the company prevents the story feeling stale. What is more, the graphics and ‘pops’ of emojis and reactions are somehow reminiscent of the extravagance opera is usually known for.

Despite this exaggerated nature, Menotti’s libretto is as bouncy and flowing as the musical accompaniment. As an opera for a new generation the language is accessible and direct, peppered with enough romance to raise a smile. Pulled off triumphantly by McGovern, the audience has little issue empathising with Ben’s attempts at confessing his feelings for Lucy. Surprisingly, he not only captivates us with his pristine voice – with an effortless command of the baritone notes – but also when he breaks with tradition and speaks his lines, as his desperation screams louder than it possibly could in song.

Just when you suspect he’s dodged a bullet, Mafi surprises us with spectacular vocals and an endearing performance. Remarkably engaging, there’s a hint of Disney princess to Mafi but with the vocal range of a tried and tested industry star. Softly and delicately Mafi climbs the bars as Menotti’s composition climbs to the piece’s exciting climax. Their harmonies bring The Telephone to a soppy, dramatic, and pleasant conclusion.

This intimate film centring itself on the everyday occurrences of life and love makes for an engrossing short from Scottish Opera. Together, McGovern and Mafi prove that, despite the festival city falling silent this August, Edinburgh’s musical scene isn’t going to go quietly into the night – it’s just on hold for now.

The Telephone is available to watch here