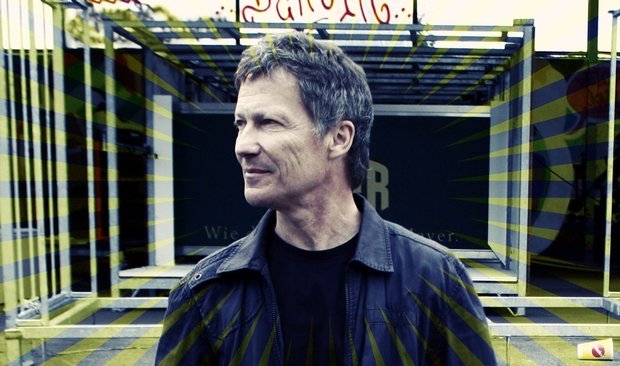 NEU! Reekie! put on an excellent night of music and more featuring legends of post-punk and krautrock

At the top of the night, Pedersen informs us that he and Williamson had a bet that if ever they managed to get one of the founders of Neu! to perform then Williamson would learn German to introduce them, which he did. So throughout the night, we get dual language compering, which makes it feel a little like an arty, experimental Eurovision at times.

Another thing we get throughout the night is experimental short films instead of intervals in-between each act – most of which are animated, some of which are very good and some of which are on the meandering, pretentious side. Musically, we open with The Honey Farm who deliver a short, sharp set. After a fiercely feminist spoken word intro from Pimpses Asha, they launch into a handful of their songs which mainly have an old school 90s vibe. They are fun, vibrant performers and while bits of the music can be on the generic side and some of the lyrics are quite childish, it is still a solid set. The highlight is LADS a hilarious take-down of lad culture.

Next up are Fire Engines who play two sets of just over 20 minutes each tonight in what is to be their last ever performance. Both sets are energetic, spiky and full of sharp-edged angular guitars as they rattled through their most known songs such as Get Up and Use Me (famously covered by Franz Ferdinand) and Hungry Beats. Singer/guitarist Davy Henderson provides the focal point, particularly in the first set where he performs in a tin foil Kagool. Slightly rambling between song banter aside, he puts on a great show. In the second set, there is a surprise too when they are joined by ex-Josef K guitarist Malcolm Ross.

In between the two Fire Engines sets we get spoken word from Lydia Lunch who tells us at one point that she was 59 on her last birthday. Despite this, Lunch has lost none of the fire and fury that has been the hallmark of her career. She delivers a series of poems that cover death, politics, feminism and oppression, as well as tales from the gutter, all spat out in her trademark husky New York drawl. Much of the audience are rapt by her performance. The chatter from the bars at the back of the theatre somewhat detracts from it, not that Lunch gives a damn as she seems to meet both that and applause with equal scorn.

This epic night of music, poetry and experimental film ends with a magisterial set from Neu! frontman Michael Rother. The 70 plus minute set is a career spanning mixture of songs including Neu!, Harmonia and some solo material. Rother, along with second guitarist Franz Bargmann and drummer Hans Lampe, is technically brilliant and they play a tight but immersive set. While all instrumental, there are many different textures here. There are really rocky moments alongside more spacey stuff, as well as some techno-based tracks. Unsurprisingly it is the Neu! songs, such as Neuschnee and Seeland, that get the biggest reactions. Talking of reactions, Rother seems bemused by the lack of dancing from the overly polite Edinburgh audience, at one point jokingly referring it to being like a concert the band played in Japan. Nonetheless, you can tell the crowd greatly appreciate Rother’s set which would have been worth the price of admission alone.