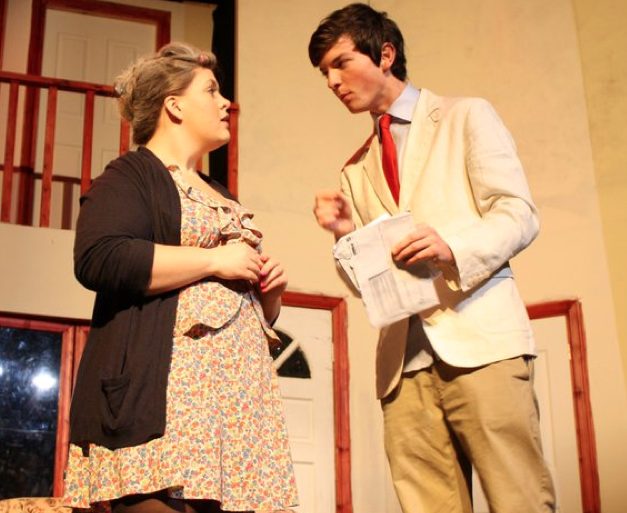 “You don’t have to be mad to work here but it certainly helps.” If you haven’t heard that old cliché in your job then you’re probably in the minority and if you’ve ever worked within the theatre then you’ll know the phrase doesn’t even need muttered. Pocketful Productions bring us an uplifting look at life on (and off) stage in Michael Frayn’s witty farce within a farce, Noises Off, demonstrating the reality behind what we see.

Otstar Productions are rehearsing for their upcoming venture Nothing On but things are not always what they seem. The director, Lloyd (David Elms), has a vision but unfortunately it’s to sleep with as many actors and crew members as possible. If that wasn’t enough to scupper the performance then the alcoholism, cast member affairs and sheer lack of talent probably is. The show must go on, but should it?

The talented company bring us a side-tearing example of the theatre world with every stereotype thrown in for good measure, as we see the characters in their performance and personal lives. With high energy throughout, a realistic set and brilliant comic timing, the play makes us laugh at the trauma of everyday life. The actors represent ourselves, as we put on a brave face to the world despite any problems we may encounter with the cracks showing on occasion. The comedy is not only in the slapstick moments but also the cringe-worthy notion that despite the heightened acting it’s not too far removed from real life. The only downfall of the piece is the length of the three acts, it would have been a satisfying end after only two. This was more than made up for with standout performances from Liz Black’s incompetent Dotty and Neville Galvin’s slightly wet Frederick. In all, an entertaining evening with a hint of sadness lurking behind the laughs.