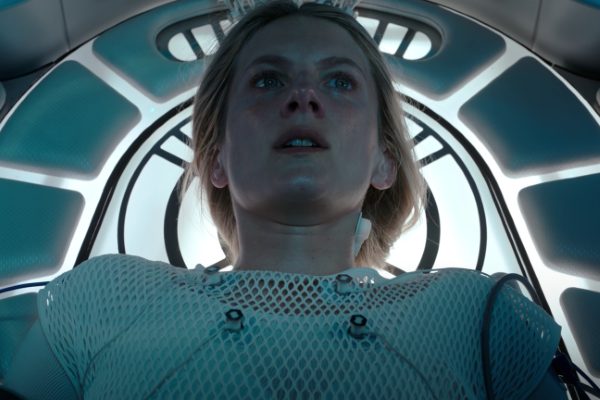 Necessity is the mother of invention, or so they say. Film after film has attempted to see what pleasures await if you remove and/or restrict certain elements of your production; this is after all a medium that began without sound and took even longer to introduce colour. Oxygen is the latest edition in a long line of single-location pictures, with director Alexandre Aja, writer Christie LeBlanc, and star Mélanie Laurent all trying their damnedest to discover the thrills they can conjure up under such limitations.

Oxygen makes its way to us as the newest member of Netflix’s three great obsessions (true crime documentaries, auteur driven awards plays, and low-to-mid budget Sci-Fi adventures – no prizes for guessing which category this fits into); the regularity of such releases threatening to bore the audience much more than excite (for context, Stowaway is barely two weeks old) A pitfall into which Aja’s film stumbles almost immediately. In other words, it’s a snooze-fest.

Laurent plays Dr Elizabeth ‘Liz’ Hansen, who awakens locked in some futuristic cryochamber unaware of who she is or how she got there. In fact the only thing we know for certain is that her oxygen supply is currently at 33% and falling. Time to prepare for a taught 90 minute thriller, right? Wrong! Oxygen’s central location, the cryo-unit (M.I.L.O, voiced by Mathieu Amalric), is so overstuffed with bells and whistles that you can almost hear it screaming, “This isn’t just sci-fi Buried!!!” and while that’s kind of correct, it’s only because it removes the lean, claustrophobic horror of Rodrigo Cortés’ 2010 hit and replaces it with a central mystery so broad that the audience will have figured it out before we even reach the first flashback.

Speaking of flashbacks, there’s a tonne of them. Whether it’s LeBlanc’s script or Aja’s direction, at some point along the way it was deemed necessary to have us continually jump into open world scenarios. Yes, these are mainly short and dialogue free sequences, but they are so plentiful in number as to completely destroy the oppressive tension that might otherwise be felt by forcing the audience into containment alongside Laurent for as long as humanly possible. Adding insult to injury is the fact that Aja proved he had the goods when it comes to constructing tremendous dread from scant resources with his 2019 release Crawl. Whatever lessons he might have learned on that production, he either doesn’t apply them here or he’s too uninterested to even try.

Of course, given that this story takes place entirely with our lead character stuck in a fancy box, the writing becomes ever more important – there are only so many ways you can disguise baffling plot choices or poor dialogue, and by restricting themselves to one character, the filmmakers walk into this fight with one arm tied behind their back. It is undeniable that some things which we’re supposed to engage with here simply do not work; take for instance Hansen’s (Laurent) struggles to remember her name, her identity, her life, how she got here and so on and so on. Yet, given that we watch her only semi-piece things back together we are supposed to find ourselves emotionally engaged when she leaves a message using M.I.L.O’s voicemail about the memories of her “whole life” with a certain someone. She claims to know laughs, smells and a bunch of details about a second person despite the fact that she has to be told her own name. In the end, it feels like a checklist of points to get through and damnit if it doesn’t matter how they connect. Even Laurent, who is a captivating and empathetic presence on her day, cannot save the material, and is not really giving us much beyond the bare minimum for this type of role.

Oxygen is a high-concept sci-fi thriller which will do little to entertain an audience familiar with the tropes it walls itself into. A few jump scares aside (and the lowest common denominator ones at that), the film will have trouble raising an eyebrow, never mind a heartbeat. What once might look like a nasty stain on the careers of a promising filmmaker and star will thankfully be completely forgotten in a mere few weeks. Netflix’s algorithm might have it’s flaws when it comes to identifying the content people want to watch, but it’s most certainly effective for those we wish to ignore. Give it a month and Oxygen will disappear and for that we can all breathe a sigh of relief.