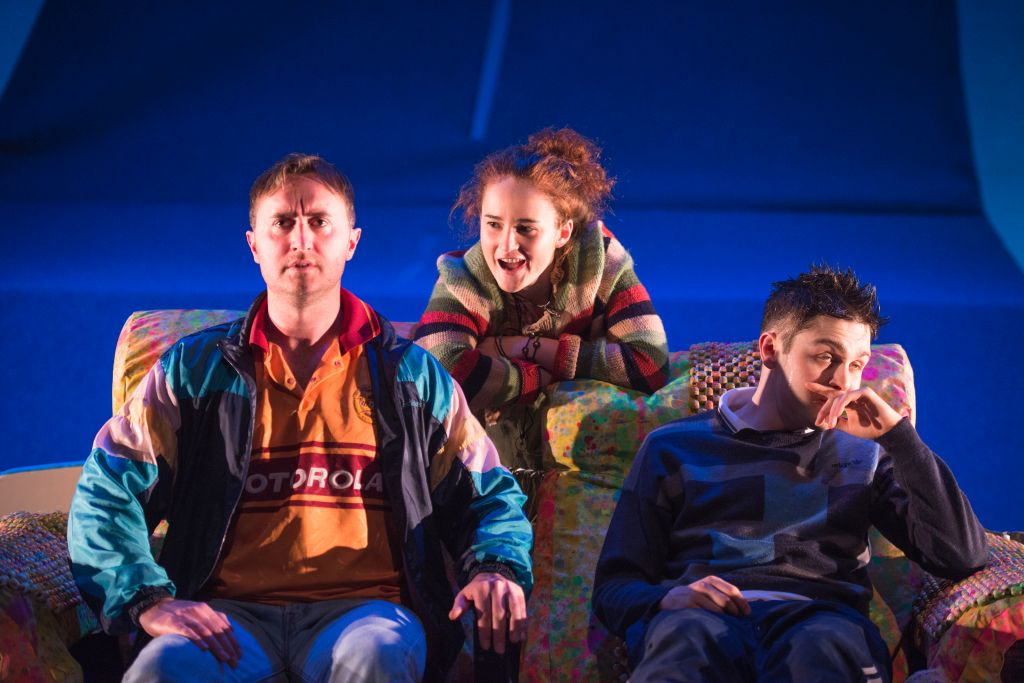 Road movie for the stage is a phenomenal, heart-felt comedy adventure.

Passing Places has been described as “a road movie for the stage” and in the Dundee Rep production a real sense of movement is created through an astounding mix of comedy, acting and staging. Every element is blended seamlessly to create a performance that is utterly captivating and hilarious.

The entire cast, made up of the Dundee Rep Ensemble, offer incredible, fully-realised performances. Ewan Donald as Alex and Martin Quinn playing Brian are in turn bitingly sarcastic, charismatically naïve and potently vulnerable and command the stage and the characters. From bitter fights to moments of slapstick comedy juggling a surf-board they connect in a way that is realistic and truly heart-warming. The comedic timing is excellent, with the faultless back-and-forth creating a rhythm that gives the witty dialogue a chance to shine.

Particular note should be drawn to the performances of Barrie Hunter and John Kielty. Hunter as Binks is delightfully evil and blends the unsettling instability of the character with physical and verbal comedy that makes him stand out in every scene. Kielty is similarly dynamic, through the catalogue of characters he plays including a lollipop lady and drunken bridge worker he gains raucous laughs from the audience and brings a whirlwind of charismatic energy that vitalises each of his various roles.

Each and every performance is well thought out, impeccably timed and the chemistry between the characters is palpable. The dark subject matters including suicide and loss are dealt with in grace and poignancy without ever losing the energy created through the comedic elements. The Rep ensemble don’t simply perform this play, they make it their own.

The staging is inspired and exciting. A pouf seat serves as a motorbike; the sofa acting as a car is particularly impressive. With smoke oozing from it and the dramatic change in paint job, it has all the charm and character of the play itself.  The cast also act as the band, providing the live musical accompaniment and sound effects. The set is also clever and is used well, with a ramp and raised platform painted to look like a road. It is original and offers an interesting change to a simple, flat stage.

What sets Passing Places aside from other performances is how heartfelt it is. A sense of movement is not only captured through the innovative staging but also through the character development. The simple addition of props such as blankets and fairy lights transform the space and the host of eccentric side characters played by Emily Winter and Taqi Nazeer help propel the plot forward and take the audience on a journey. Quinn and Donald also expertly portray self-discovery and themes of growing up through every facial expression, crude gesture and soliloquy, serving to further develop their multi-dimensional characters and create memorable performances.

The themes present in Passing Places are well-established: change, love, loss, but with Andrew Panton’s direction and the fantastic performances of the entire cast and creative team this play is brought to life through impeccable comedy, energetic performances and moving drama.