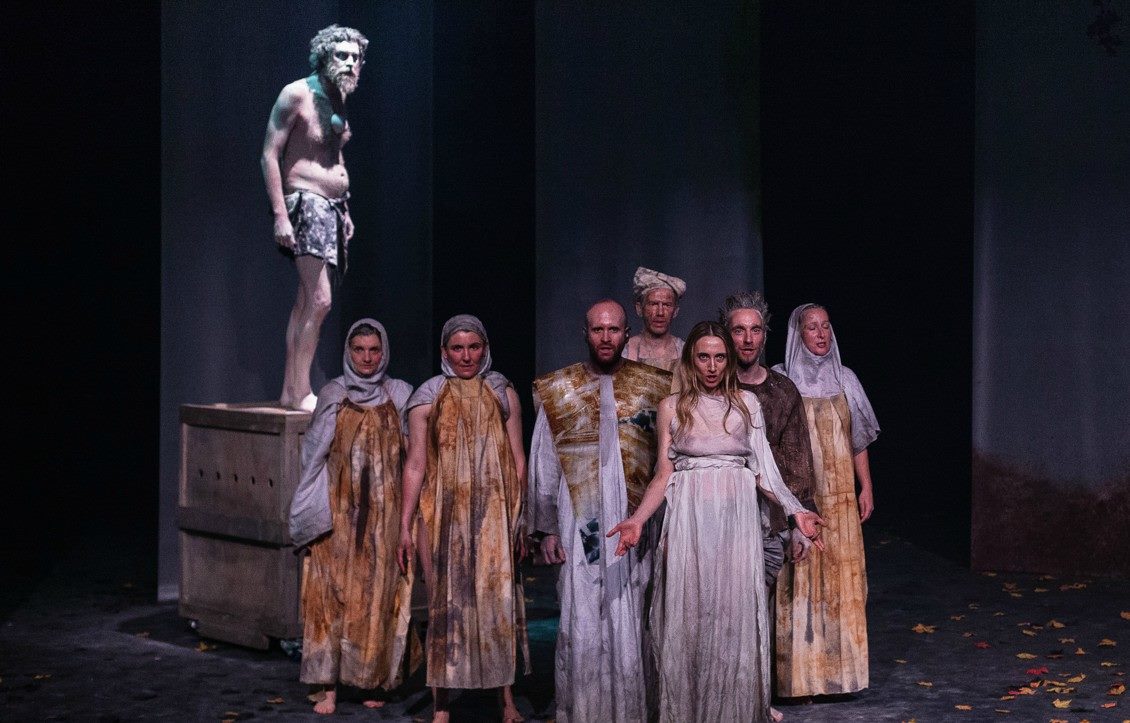 The Shadow of Heaven

The Shadow of Heaven, directed by Seed and Milligan and co-produced by Macrobert Arts Centre and Feral Arts, began as a research project considering the links between the chorus of Greek tragedy and the figure of the bouffon. As such, the piece features a troupe of bouffons, a ragged chorus of twisted figures in tattered, vaguely historical dress, who provide elucidation, singing, and grotesque scene-setting physicality.

At first, the set, with its bare tree branch overhanging scattered orange leaves and gauzy, white scrims hanging in strips, appears almost Otherwordly. With the introduction narrated by a figure whose physicality is strongly suggestive of Puck, one might suppose it to be fairyland – albeit a slightly disturbing one, where a blindfolded man is being flogged. Saturated red light helps transforms the space into one more resembling hell, and with different lighting and two large, movable boxes of different height, also serves as Chaos, the Sun, and the Garden of Eden. The scrims are used advantageously to make hazy shadowy figures out of cast members.

The soundscape, by Guy Veale, adds to the creation of an atmosphere of carnal depravity and uncanny horror through environmental noise, pounding rave music, and dissonance. Live singing and eerie vocals are provided by the chorus, particularly Sita Pieraccini and Fionnuala Dorrity.

The physical acting also helps produce the unearthly feel. The chorus creep about, demon-like, or perform repetitive movements to pulsating music, while the more humanoid Satan (Al Seed) plots and raves. Satan’s inhuman children, Death – who has the most amazing claws – and the rather crab-like Sin (Liz Strange) are wonderfully creepy, while Eve (also Strange) has an air of otherworldly innocence and intelligent curiosity.

Lines are taken from Milton, and comprise high-register, slightly archaic sounding, blank verse. As a whole, The Shadow of Heaven seems to exist in some separate, timeless world, far removed from our own. As a piece of theatre, its strength lies primarily in its sensory appeal, with its visually spectacular imagery and unconventional soundscape.