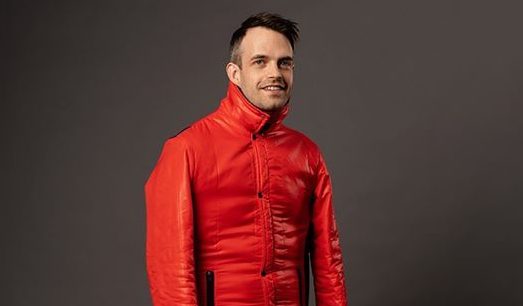 Neo-music hall numbers work wonders for the man in orange.

The lengths some performers will go to for visual impact, eh? Pat Cahill arrives on stage in orange wig, orange body paint and an uncomfortable looking retro shirt and trousers combo. As he swelters in the heat of Monkey Barrel 5, the orange face paint melting into the bright red face beneath, you have to wonder if the effort’s going to be worth it. By the end, even though the tangerineness has only been used for anti-climactic purposes, you realise it definitely has.

Uncle Len… is about life’s characters (wa-hey!) and life’s ‘characters‘ (stay away!). It’s about work, automation, purpose (and the lack of it). It’s about following your dreams and all that cheesy stuff. And it’s also about nothing in particular. Creativity such as Cahill’s can run away with itself and meander all over the place without hanging together. 2017’s The Fisherman was guilty of that. This one gels. Cahill gets to be both playful and, very obliquely, meaningful.

Cahill’s Uncle Len was a steady eddie engineer who spent forty years manufacturing one intricate engine part that no-one else knew how to, until hi-tech Swedish machinery did for him and he was out on his ear. He then had a stab at the 70s variety circuit as an act called Cinnamon Brown before giving up and spending the last sixteen years of his life fixing his wife’s hoover.

This shaggy dog story is told with the aid of comedy music hall knees-ups. Bloody catchy ones too. Musical theatre must have a place for Cahill if he ever gives up the stand-up, because you’ll be humming these hours after. ‘I’m the man who makes the thing…’, goes Uncle Len’s theme tune, over and over…

Even the songs that are more obvious flights of fancy, with little to link them to Len, somehow get woven into the story without seeing the joins. Like Recumbent Bike, a ditty about the joys of such transportation, which gets progressively sillier. Note: don’t sit down the front unless you want to be the pedals.

Cinnamon Brown’s two numbers are gloriously daft. Bing Crosby and David Bowie definitely wouldn’t be regulars on the Christmas playlist if their version of Little Drummer Boy were anything like Cahill’s. He makes a supremely childish idea somehow work for three verses. The second is a gossipy number about one of the ‘characters’ you ought to stay away from, and explains why the variety circuit wasn’t for Cinnamon.

In between times, Cahill casually chews the fat about the life and times of Len, his air of generally not giving too much of a fuck about stuff being belied by how well this has been put together. Visual gags eventually explain the orangeness and we get a sense of an ending for Len, though we’re not sure if it’s ultimately good or bad or… what does it all matter anyway?

Cahill deserves much more for this than the crowd are giving him today. Possibly they don’t really know how to take him; Cahill’s entertaining without necessarily being joke after joke. As a result, Uncle Len… is the kind of show you can enjoy without really knowing why. But if you’re inclined to appreciate the craft behind it, you’ll find it’s very good indeed.