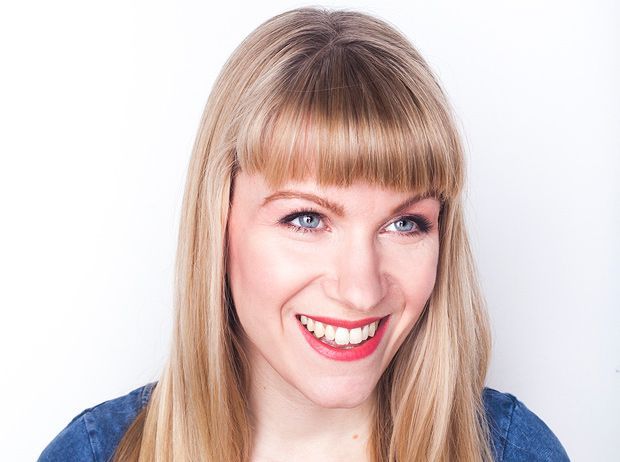 Entertaining, but choppy hour that covers a little too much ground.

Rachel Parris’ new hour has an intriguing premise.  The Austentatious member and Mash Report contributor has been asked to present a motivational speech to the students of her old school in Loughborough.  She’s finding the task a daunting one, and in an Olympic-level bout of procrastination she’s based an entire show around it.

An opening montage of iconic speeches from modern history introduces Keynote and offers intimidating standards to live up to.  Parris doesn’t try, of course.  It merely serves as an introduction to a multimedia-heavy show that takes in stand-up, musical comedy, character-based interludes, and audience interaction.

It’s slickly presented, with Parris’ matching her spoken or sung material to the onscreen images seamlessly, with the ease of a veteran weather presenter.  This is undoubtedly a lovingly-compiled show, rehearsed to a glistening sheen.  It is however this precision that gives Keynote an occasional air of stasis.  Although the occasional chats with audience members suggest that she’s invested in a thoroughly proficient tech person rather than it all being programmed to a split second, there’s a clinical undertone.  Many of the finest shows so far this year (granted, it’s early doors) feel like there’s a sense of evolution in their construction; or at least a constant process of tweaking.

Parris also rather pinballs from topic to topic.  She rattles through aspiration, love, drugs, families, and other standard subjects, giving them a cursory glance before removing them as suitable fields about which to address 500 schoolgirls.  The constant shift in styles also emphasises Keynotes choppy nature.  If it’s intended to showcase her full range of talents, it’s an understandable decision. She has an undoubted flair for accents, is an accomplished song-writer, and combines an energetic stage presence with a winning cynicism.  However, just as you’re warming to a character, or are willing her to develop a tantalising strand, she leaps to another subject.  Tick.  Love covered.   Tick.  Drugs dealt with.

It needs to be stated that you’re unlikely to be disappointed by Keynote.  Certainly, there was no one in the audience that appeared to be regretting their decision.  Rachel Parris is a dextrous all-rounder, and one suspects there’s a bit of false modesty and she would actually be rather excellent at delivering a rousing speech.  She can’t be faulted for wishing to utilise all her considerable skills, but Keynote plays like greatest hits package that lacks the context and flow of a classic album.  The snippets of the great orators she’s chosen to open her show act as an apt commentary on their own. Those lines have become iconic by virtue of the quality of the entire speeches they form part of.  On their own, they’re sound bites.