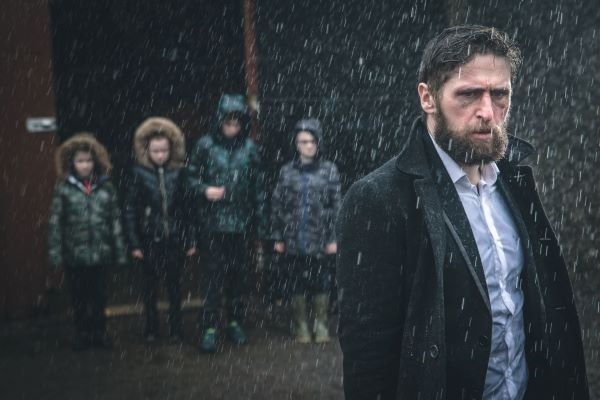 Redemption of a Rogue

Pitch-black comedy makes perfect use of some familiar elements

You’ve got to really hate someone to use your last breath on this earth to try and throttle them, but that’s exactly how the father of Jimmy Cullen (Aaron Monaghan) has huffed off this mortal coil. There has been no fatted calf for this prodigal son who has come slouching back into town in ignominy after seven years in exile. He is hated by everyone from the ex-girlfriend he abandoned after injuring her in a car accident, to the village residents who can’t forgive him letting in a soft goal at an important gaelic football match. Even his brother (Kieran Roche), who quite likes him, greets him with a headbutt.

Jimmy has come home with the intention of making his peace and then killing himself. However, his plans are put on hold after his father’s death when the heavens open and the Cullen boys are told that their father stipulated that he is not to be buried when it is raining. But that deluge shows no sign of stopping. In fact, if anything it’s getting heavier. Some would call it, if they were of a mind, biblical.

Redemption of a Rogue is something of a patchwork of various familiar elements. It feels very much in the post-Father Ted tradition of finding the surreal humour in the Celtic provinces, from the little-remembered Twin Town through The Guard, Grabbers, and John Michael McDonagh‘s Calvary. It isn’t even the only film at GFF drinking from that wellspring (Hello, The Toll). Still, Philip Doherty’s debut specifically draws on the same redemptive themes and Bible-black humour as McDonagh’s dark masterpiece and adds some choice sprinkling of the Coen brothers, and the deadpan melancholy of Aki Kaurismäki to create something rather special on its own terms.

Crucially, Monaghan does a great job at making Jimmy someone to root for, despite clearly being a bit of a shit, and responsible for some pretty heinous actions in the past that are difficult to pass of as youthful indiscretions. It’s a tough role, as he had to find a balance somewhere between catatonic apathy, man of action, and voice of reason. And it’s hard to be the voice of reason when you hallucinate that the Virgin Mary is cadging a cigarette of you. Helping him is Masha (Aisling O’Mara), a fellow pariah in the village for being something of a Mary Magdalene figure. The earthy Masha helps to smooth some of Jimmy’s rougher edges and operates as something of an audience surrogate and anchor when things threaten to get too silly.

As you would expect from someone who cut his teeth as a playwright, Doherty’s script is bitingly witty, and walks a line between acknowledging the outright absurdity of its Catholic symbolism, and displaying an agnostic unwillingness to dismiss it all entirely. Its surreal scenes are woven neatly into the story, being only slightly heightened above the ‘prosaic’ humour of a dead father stuffed in the freezer with the pizzas until the rain stops, or a group of schoolkids solemnly witnessing a dismal suicide attempt.

Essentially an eschatological examination of depression, Redemption of a Rogue masks its genuine melancholy underneath a mask of religious satire. It has a field day wielding its myhology with the irreverence of a drunk bride-to-be swinging an inflatable cock, and if you can tap into its weird wavelength, it is genuinely hilarious. At the same time, Doherty acknowledges that religion is entwined around Ireland like a pit full of the serpents that fucker Patrick chased out, and lets that ingrained guilt and shame get properly lodged under the fingernails. Jimmy Cullen may believe in the concept of redemption, or he may not. But, comedy though this is, the Redemption of a Rogue won’t come easy. While it isn’t quite as polished, or quite as dramatically hefty as Calvary, comparisons to which are inevitable, Philip Doherty has nevertheless crafted a stunning debut.