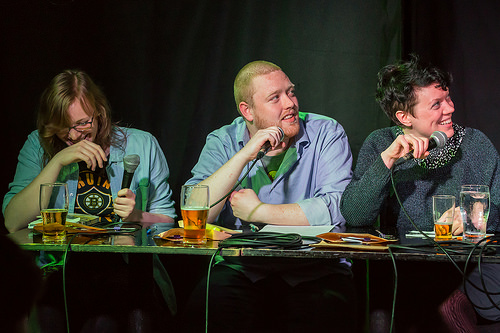 [Rating:4/5] Like a crazy russian roulette version of fill in the blanks. Comedy isn't always rainbows and unicorns unless it's a joke about unicorns at a sausage festival.

At first glance the sweaty packed basement of Banshee Labyrinth is a bit like being in the movie Hostel. Sitting in the front row of the audience, everyone nervously looks at the man now on his third pint, stacking glasses on the performers’ table and interjecting loudly throughout the show. While most of us assume he’s just an enthusiastic guy who enjoys many pints, he’s actually one of the performers. This first impression sums up what it’s like to see Poets Against Humanity; a little bit uncomfortable mostly because the jokes can’t be retold in polite company to put it nicely.

The premise is based on the popular American party game, Cards Against Humanity, where players draw cards with phrases that are completed with highly inappropriate and hilarious phrases. Popular phrases from the game include “my humps”, “sausage festival” and “Steven Hawking talking dirty”. Those are the cleaner ones. The show uses these phrases inserted into some well known and original poems written by the performers like a crazy russian roulette version of fill in the blanks. Poets take turns using their best phrases in a round robin style panel show. The result is relatively smooth and tastelessly funny. Between rounds three other poets also get a shot at performing their own works.

Horrible people will love Poets Against Humanity only showing on one date during PBH’s Free Fringe. Even people who don’t admit they’re horrible yet will love Poets Against Humanity. This isn’t a show for the easily offended, but comedy shouldn’t have to worry about being all rainbows and unicorns unless it’s a joke about unicorns at a sausage festival.