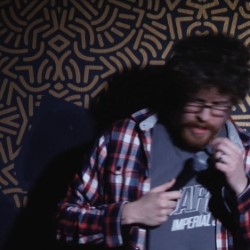 Richard Brown
You Are Not My Audience

Intense alternative comedian pulls together an impressive and thoughtful show

It’s rare to see a Scottish comedian with so much to say about his own death and still feel uplifted by his material at the same time. You Are Not My Audience starts off by introducing himself as an “observational comedian”, putting on a scarily accurate impression of 95% of acts on the circuit before exposing himself as a fraud. His desire not to be lumped in with the observational crowd gives you an idea of the show to come, a ruthless and angst-fuelled set with clever, impactful writing.

“Have you all read the flyer?” Cracking open a condensation covered can of Tennants, we’re introduced to Brown and his Fringe run so far, which he states multiple times is not for everyone. In the first five minutes he references his recent mental breakdown, his incapacity to understand people and treats us to several jokes about his jealousy of the dead. We don’t need to know why he might be depressed, all we know is that’s he’s been driven to the point of suicide and back again to the edge of where it might actually be kind of funny.

Brown doesn’t present himself as a character that’s trying to tick all the boxes and have a problem-free set that services the needs of the audience. He describes it as a show that gets gradually darker, but that’s only if that annoying part of yourself will let it. The material touches on the inherently macabre and unfunny elements of modern life, because that’s the one challenge left for Brown to craft a joke worth telling. If something’s already funny, what’s the point in making a joke about it? It’s being open to this kind of content that will turn you on to the best salt ‘n’ sauce abortion joke you’ll hear this year. Humour related to a dialogue about the open secrets of #MeToo shows how quickly the dynamic changes; it was all funny last year when audiences thought Brown was being libellous about Louis C.K. – but now these truths hit too close to home.

For a guy with one of the central belt’s most miserable worldviews, his stance will leave you somewhat elated with comedy as a whole. Offensive topics and black comedy have an important role in progressing the stand-up medium past its innate mediocrity. Vulgarity and irony drip across each joke with varying levels of effectiveness, but they mostly land on solid footing with some great afterburners. You Are Not My Audience is an honest show with something to say underneath the surface of jokes half-kidding about suicide. Brown uses comedy as a filter to channel his insanity, a defence mechanism to prevent the honest parts of himself bobbing to the surface. To him it might seem that life couldn’t get any bleaker, but his jokes continue to slay the crowd line after line.