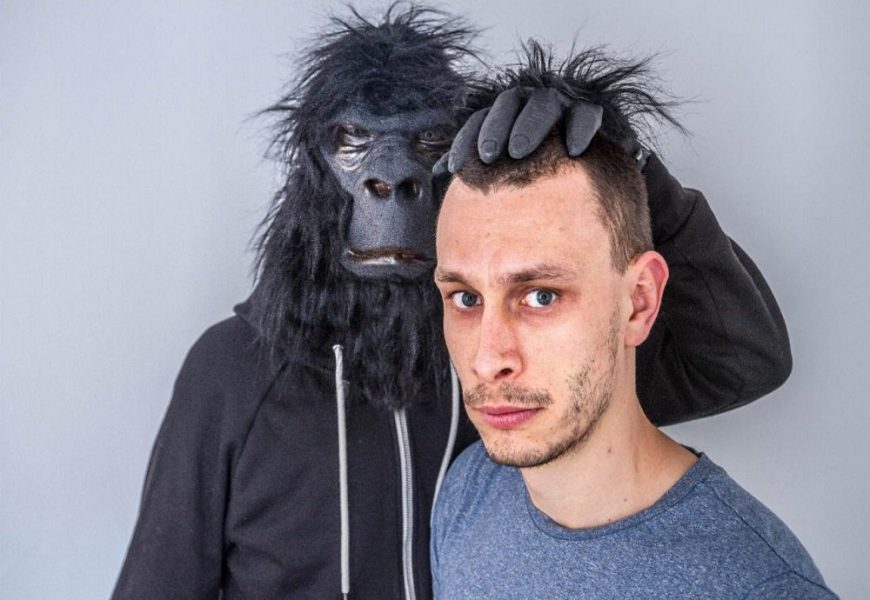 The phrase “genre-busting” has been applied to Richard Gadd’s comedy more than once. But though this may at first seem like another lazy platitude, Monkey See Monkey Do really does assault the audience and throw us into a conundrum when it comes to assigning it a label. Monkey… incorporates clever stand-up, intense monologues, disorientating audio recordings, absurd video projection, and even a treadmill that runs for fifty minutes. Yes. Gadd’s show is a serious physical feat as well as a comedy gig – if we can call it that; a question Gadd raises himself.

In an arresting beginning, Gadd instantly jumps onto the treadmill with music and visuals bombarding us. For some, it may require a slight adjustment of preconception to get into the show’s frenetic groove, but we’re soon in Gadd’s head space, following him on a mental journey to his fictional Man’s Man competition.

This idea of manliness lies at the core of show. Among other things – depression, anxiety disorder, sexuality and addiction – Gadd provides us with an exploration of masculinity: what it is, how others see it, and whether or not it’s even real. So no, this isn’t a standard stand-up set of observational anecdotes and dirty punchlines. It’s a genuine form of catharsis through art and an insight into Gadd’s reflections on some of his innermost difficulties, all building towards an incredibly personal and sensitively crafted reveal. Through video footage and the art of implication, Gadd shares a sensitive and harrowing memory with us, without actually detailing it in any explicit sense. But this is no fabrication. Gadd creates an honest and intimate connection with the audience.  When the treadmill, music and video finally stop we are left alone with Gadd, suddenly aware of the auditory vacuum, amplifying our connection with him.

And it is Gadd himself who makes the show, never overpowered by the theatrics. His powerful physical performance carries the piece – his movement and facial expression alone conveying brutal pain, awkward park-run encounters and ridiculous on-stage antics at the Man’s Man final.

By the end of the hour, it’s not just miles on the treadmill Gadd has powered through, but a legitimate emotional release; for the performer himself, and perhaps some members of the audience too.