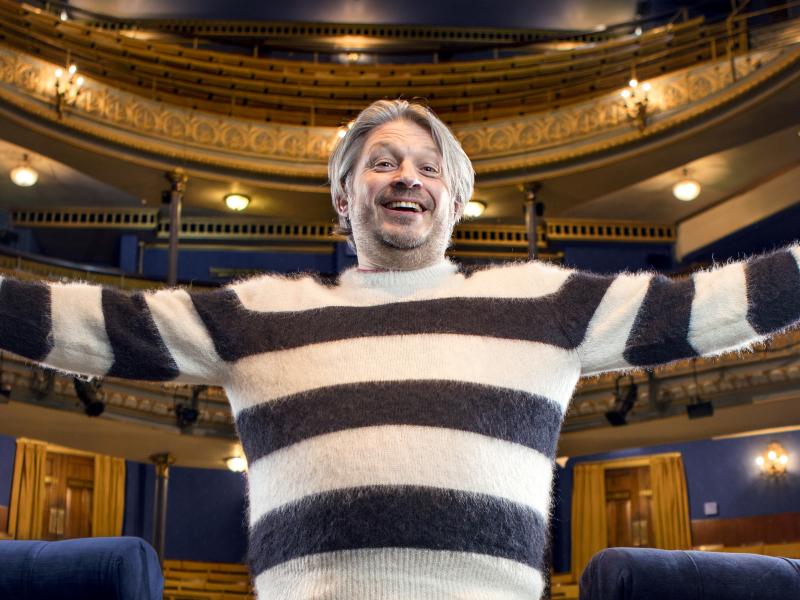 Who did you last wave your bare bum at? What’s the most unlikely thing you’ve ever seen up a mountain? If your genitals had to be replaced by the face of one of the Muppets – the face would be able to interact and communicate in exactly the same way as the puppet – which Muppet face would replace your genitals? Please explain your thinking.

…These are a random sample of the ‘emergency questions’ Richard Herring has generated to ask his celebrity guests when he can’t think of anything to say during his podcast, RHSTP. They’ve elicited such memorable and entertaining responses over the years from the likes of Stephen Fry, Richard E. Grant, Bob Mortimer and Dawn French that Herring has now published three books of these nonsensical queries – and picked up numerous awards.

Herring has a remarkable ability to foster an easy, irreverent rapport with his guests. Key to this is his pointed refusal to engage in any fawning or sycophancy. For example, a tradition of the podcast is that guests are introduced as being ‘best known for’ the least prestigious entry on their CV. (He describes himself as best known for playing a policeman on Ant and Dec Unleashed). His questioning is playfully impertinent, and he often adopts the persona of someone embittered by the greater commercial success of other performers. Today, it seems Herring has intuited that this usual formula is not going to be quite as appropriate as on other occasions, resulting in fewer opportunities for big laughs than fans of the podcast might have come to expect.

That said, he does open his interview with first guest Isma Almas true to form by telling her he hadn’t heard of her until very recently. Their conversation about BAME representation in comedy and the discrimination Almas continues to face as an Asian, Muslim and gay performer uncovers some shocking and unpalatable truths. Herring at points veers a little close to insensitivity in his attempts to bring levity to these discussions, but it’s clear throughout that he means to be supportive of Almas. Almas herself is a thoroughly engaging and funny interviewee.

Herring’s second guest is Tony Slattery, whose various personal troubles, including addiction and mental health issues, were recently explored in an article in the Guardian. Herring treats Slattery with warmth and affection, encouraging him to share personal stories and being careful not to cut too close to the bone with his questioning. This seems well-judged: although Slattery tells us things are on the up for him, and that performing his show at this year’s Fringe, Slattery Will Get You Nowhere, has renewed his self-confidence, he comes across in today’s discussion as perhaps still a little too vulnerable for the Full Herring Treatment.

Happily, however, Slattery does prompt the biggest laugh of the hour, and responds commendably quick-wittedly to Herring’s trademark question about autofellatio. Other highlights include him talking sensitively about falling in love with his partner, Mark, and some darkly comic and self-deprecating anecdotes about his drug-taking during the peak of his addiction. Herring’s final remark at the end of the hour, “Everyone loves you, Tony,” underlines a sense of protectiveness towards his interviewee that has been evident throughout.

While not the most laugh-a-minute of RHLSTP episodes, today’s discussions are undoubtedly compelling and often amusing. Herring has set himself a prodigiously high bar over the years, and variations from episode to episode are par for the course with this kind of format. All in all, it’s a solidly enjoyable hour, proving Herring worthy of his nickname, ‘The Podfather’.