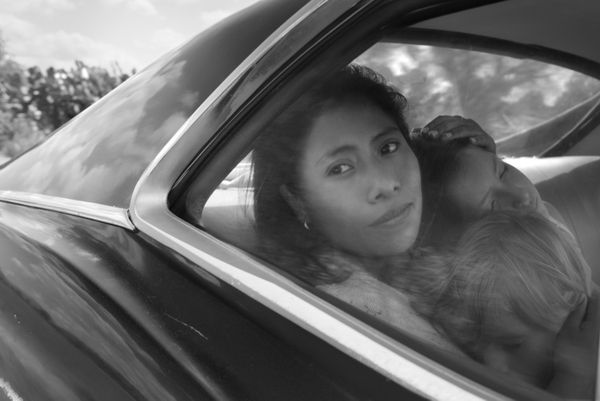 Cuaron's depiction of Mexico City in the 70s is a masterclass in film-making.

Winner of the 2018 Golden Lion, Alfonso Cuaron‘s Roma depicts a year in the life of Cleo, a passive and stoical domestic servant employed by a wealthy family in Mexico City.  Set in 1971, the film is semi-autobiographical, inspired by and dedicated to a maid who worked for Cuaron’s own family as he was growing up, with whom the director reportedly remains in close contact. At once an intimate portrait of an individual’s experience, and a snapshot of the volatile political climate of the Mexican Dirty War, Roma is utterly mesmerising and fully deserving of the various nominations and accolades it has garnered to date. Believe the hype: Roma is truly a masterclass in first-rate film-making.

The film’s title refers to the Colonia Roma district of Mexico City. Once a salubrious area, synonymous with wealth and middle class aspiration, Colonia Roma experienced a period of transition in the 1970s, when the onset of a process of deterioration rendered the region somewhat down at heel, before a recent renaissance in which the area reinvented itself as a trendy, hipster hot spot. There’s a distinct element of psychogeography at work here, as this transition reflects the changing central relationship in the film – namely, that between Cleo and her employer, Sofia (Marina de Tavira). Differences in social class, race and language become gradually more irrelevant to their dynamic, as personal strife experienced by both women causes them to play integral roles in each other’s lives. Following traumatic events such as the breakdown of a marriage, a pregnancy out of wedlock, a forest fire, and the horrific events of the Corpus Christi massacre, Cleo’s position at the very heart of the family is firmly established.

Cuaron’s use of black and white is not only visually satisfying, but creates a sense of objectivity that allows the film to be brutally emotionally powerful without veering into over-sentimentality or patronising nostalgia. This is further enhanced by the clinical tracking shots that dominate the film. Depth and texture is added through the use of sound – while the lack of soundtrack during the opening and closing credits creates a sense of sobriety and nebulous unease, the use of Dolby Atmos draws the viewer into a realistic audio landscape, reflecting both the defining anxiety of the lives of characters and the chaotic atmosphere of a city in turmoil, in which natural disasters and political violence loom as ever-present threats.

The central performance by Yalitza Aparicio is heartbreakingly compelling. Aparicio is not a trained actress, but was a school teacher in rural Mexico, discovered by Cuaron when he sent teams of researchers to indigenous communities for casting calls. It would be condescending to reduce her accomplished performance to simply “authenticity” and point to parallels between her own experience and those of the character. The quiet humility, empathy and emotional restraint Cleo displays are balanced by raw, dramatic outpourings of emotion in the latter half of the film, thus demonstrating Aparicio’s breathtaking talent.

There are moments of incredible humour in the film, the subject of which is often the ridiculousness of some of the men whose callousness and self-interest damage Cleo and Sofia. Fermin (Jorge Antonio Guerrero), a fleeting boyfriend of Cleo, whose lack of character ultimately proves to be genuinely sinister, is given an unflattering introduction, as we see him giving a mockable and completely earnest martial arts demonstration in the nude. Similarly, when we are introduced to Sofia’s husband, Antonio (Fernando Grediaga), a sense of his inflated ego and impractical nature is illustrated before we even see him, through a comical sequence of shots showing him painstakingly parking his ostentatious car in the house’s garage space, which is clearly too small for such an oversized vehicle. A visual reference to Gravity may also be a self-deprecating and humorous demonstration of masculine egocentricity on Cuaron’s part. This eye-rolling take on male pomposity contributes to the central theme of the strength of women and the power of female friendship. “No matter what they tell you, we women are always alone,” says Sofia to Cleo, ironically just on the cusp of their mutual realisation of the significance of their bond.

Roma‘s impressive technical accomplishments, gut-punching emotional power and staggering aesthetic beauty confirm its status as one of the finest films of 2018.