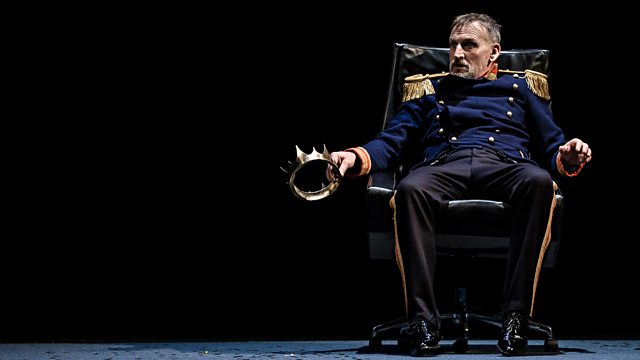 As stylish and professional a take on the Scottish Play as one could hope for, with a wonderful lead performance from Christopher Eccleston

The 2018 Royal Shakespeare Company performance of Macbeth, now available on BBC iPlayer as part of their ‘Culture in Quarantine’ series, is an especially mind-bending take on ‘the Scottish play’, which proves both a blessing and a curse. It is endlessly fascinating, and trying to wrap your head around the setting proves far more enjoyable than laborious; at the same time, it sometimes bites off more than it can chew. However, some fantastic performances and a sly use of key characters ensure that Polly Findlay’s production testifies to the endless ingenuity of Shakespeare’s work.

Findlay has a strong history of Shakespeare adaptations, and her take on Macbeth brims with a confidence that powers this dark story of betrayal and ambition to the bloody end. The setting appears deliberately ambiguous – is it some amalgamation of a present day royal family, or is the whole story a result of the emotional and moral decay that plagues the protagonist’s mind in reality? This strangeness proves to be the hook, and is accompanied by some extravagant visual effects and backdrops – although having the word ‘later’ lighting up in ghostly white behind the stage every so often does feel a little over the top.

The relatively empty stage gives the characters plenty of room to creep and storm their way around, none more so than Macbeth himself, played by Christopher Eccleston. Occasionally he leaves you wishing for a little more intensity, but nonetheless Eccleston is a great fit for the role. His movement and expressions capture a captivating conflict, with a genuine look of haunting that lingers behind his eyes. When raw emotion is needed, he delivers it in bounds. The same goes for Niamh Cusack as Lady Macbeth, who strikes you with her sheer giddiness when faced with the prospect of power. Their malevolent plotting satisfies the darker edge of the play, while some well placed humour helps to avoid an overly drab affair (thanks largely to the Porter (Michael Hodgson), who swaps effortlessly from a comedic side-piece to a chilling addition to the backdrop).

Unfortunately, not all of the touches really work. Casting children as the Wyrd Sisters and making them speak in creepy voices was a good move, but sticking them in pink polka dot onesies doesn’t lend them the fear factor they so clearly aim for. Much more effective is a large timer that hangs ominously over the stage, accepting the inevitability of what happens in the story. Findlay’s judgement isn’t always spot on, but this remains a chilling and inventive Macbeth that allows some truly gifted performers to flourish.

The Royal Shakespeare Company’s Macbeth is available to stream via BBC iPlayer here as part of the ‘Culture in Quarantine’ series.