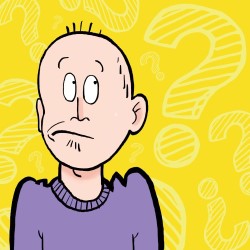 The Counting House‘s lounge venue is packed with families and the atmosphere is busy with anticipation. Writer and performer Peter Michael Marino takes to the stage to introduce the main act – Sally the Silly Song Singer – and after a fanfare and eager search, we are left with a ‘Bad News’ letter from Sally, read aloud by a keen child. Of course, the adults know there is no Sally and never was, but the titular kids around us are already absorbed, wondering what on earth is going to happen now that the star has ditched us. For the remainder of our time together, Marino decides it’s up to him to entertain us. And entertain us he does.

After initial ‘nerves’, Marino builds up the courage to burst into song and give us a jaunty welcome and already children are bouncing in their chairs to the music, fixated as if they are watching their favourite TV character. There is physical comedy, too, as the actor twists around inside his t-shirt, desperate to have it the right way round before changing his mind and starting all over again. It’s daft and silly but the target audience lap it up, and this is a key strength of the show: Marino knows what kids find funny and what they need to be kept engaged. He goes on to use a simple cardboard box, inviting shout-outs for suggestions of what it could be used for. And here’s where the real core trick of the show comes into play – improvisation. Show Up, Kids is – as the title suggests – the child-friendly adaption of Marino’s establishes successful improv comedy Show Up, although really it’s its own unique show entirely.

The bulk of the performance from here on in is interactive, improvisational storytelling. Audience members are called on not only for suggestions – famous person, superpower, favourite animal – but to be part of the crew, as one mum operates the ipad music interludes and a giddy child becomes the stage manager with a box of fun props. The story today involves Bob the pizza-maker who gains super-strength and lives in the town of Wubba-Wubba. Marino knows how to keep the pace fast enough to hold the young audience’s attention while still squeezing in hilarious quips and scenarios, even throwing in a few jokes for the adults. His frenetic physical style is perfectly-suited to this demographic as he bounds around the room, throws props around and leaps onto table tops to keep everyone enthralled. It’s all rounded off with an endearing message about kindness and compassion at the end without overdoing it or veering into teacher-mode.

As the children applaud and the audience depart, the mood of excitement and frivolity is carried out with us. It must be an exhausting feat for Marino when we consider he is also performing the adult version of the show every afternoon as well. As part of the free Fringe, seeing a show of this calibre is an opportunity to show up for.