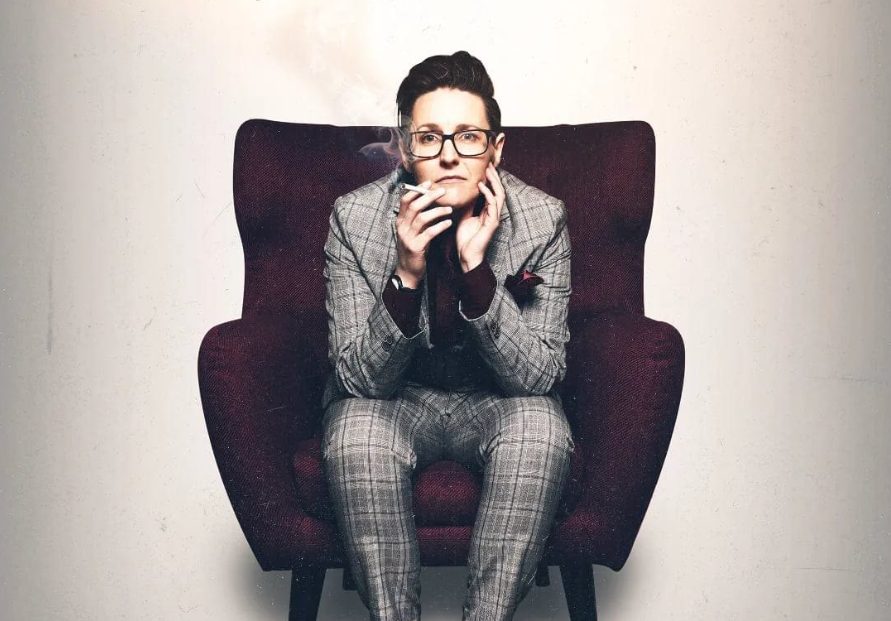 Sian Davies has been the driving force behind the Best In Class and Comedy Queers compilation shows at the past few Fringes, where her top compering skills have helped give a platform to comics who otherwise wouldn’t get much of a look-in. So, after helping others with a leg up the ladder, it is indeed… deep apologies for this… About Time she had a full debut hour of her own.

In fact, About Time is so-called because it reflects on the passage of time, and one period of Davies’ life in particular where circumstances meant she had to grow up fast. All this generates very good raw material. We get a real sense of the Davies’ household at the turn of the millennium – a working-class, Scouse nuclear family, where alcohol and religion play a big part. A segment on how mums will navigate you by vanished local landmarks rushes by in a funny flurry of nostalgic 80s/90s brand names, and Davies’ nights out round town, partying with mates, give us enjoyable anecdotes of nicking food, pissing in pint glasses, and other alcohol-fuelled high jinks of the kind we all regret when not looking back on fondly. Then, after not really being able to get on in life, she finally gets to take… or at least tries to take… a gap year in India in her late 20s, which her more privileged contemporaries would not blink an eye at taking in their teens. This give some great fish-out-of-water stories of a northern lass lost in an entirely different culture.

The material’s authentic, Davies herself is authentic, but the manner of delivery sometimes less so. It feels a little over-rehearsed and over-performed in deliberate Edinburgh hour style, rather than with her natural free and easy wit. There is a savage sting in the tail of her Indian trip, which without wanting to spoil any big reveals, ends in a rant about the benefit system and the multiple ways the country is broken if you fall through its cracks. It’s brutally true, deeply felt and brings a lump to the throat when you hear it. As pure spoken word, it hits. But in this environment, in a comedy hour, it feels flagged up and staged too deliberately. There’s a painful irony here: privileged stage schoolers have grown very skilled at pitching minor life bumps naturally as real, authentic struggles in their comedy, whereas someone who has faced serious life hurdles comes across presenting them quite theatrically.

A pubbier atmosphere might loosen it all up. Davies locks eyes with a gent while she’s squatting to mime using a drop toilet in India. It’s here we see her natural affability shine through, puncturing the awkward visual dynamic with some light joshing. She can look you in the eye, smile, and connect even while she’s on the lav. That’s people-person comedy skills you can’t buy. Davies is as easy to warm to as the national treasures she reels off in her ‘who I look like…’ bit and you want her to roll with that and find a more natural home for her working-class message than the middle-class medium of the 40 minute sad bit.