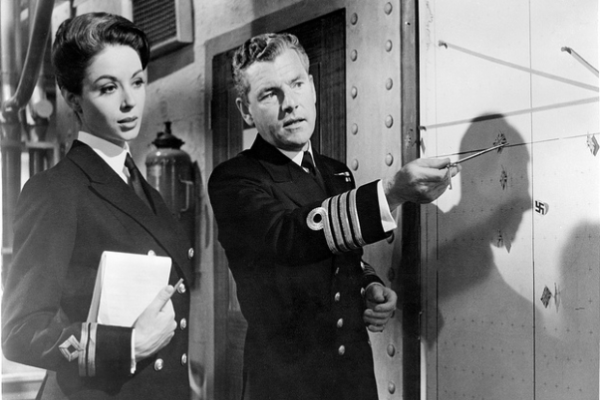 It’s 1941 and the battle of the North Atlantic is in full swing. The Bismarck – the deadly and impregnable pride of the German fleet – has been spotted in the North Sea. Finding and neutralising it could change the course of the war. It’s up to Captain Shepherd (Kenneth More) the new director of operations in the Admiralty building’s underground nerve centre to act as puppet-master.

The operations room is slack – why (“There was a rating without a jumper!”) is Shepherd prepared to gamble the lives of thousands of men by leaving troop ships without protection knowing the importance of sinking the Bismarck? As he says, “Getting emotional about things is a luxury for peacetime.”

The stress and worry about his missing-in-action son almost breaks the steely-hearted captain especially when the pride of the British Navy HMS Hood is sunk.

This is an old-fashioned war film (daytime telly viewers will be more than familiar with it) with some old-fashioned attitudes. The Germans are concerned about their careers and pleasing Hitler. Meantime, Blighty officers are stiff upper-lipped to a degree while the ratings are little more than expendable cheeky chappies.

There’s a subplot involving an attractive Wren (Dana Wynter) who counsels Shepherd that shutting himself off from other people and his own emotions is no way to deal with grief.

The movie is all very workmanlike, but the acting is fine and the effects are excellent. It gives a very good insight into the behind-the-scenes strategising and real British naval ships were used in filming (as well as some fantastic models) which lends authenticity.

How times change. A few years after it was made those playing the top brass appeared as the bumbling Whitehall mandarins trying to keep a certain Commander Bond in check (Gilbert went on to direct several 007 outings). And a few years after that you can see where Gene Roddenberry got his ideas for Star Trek.