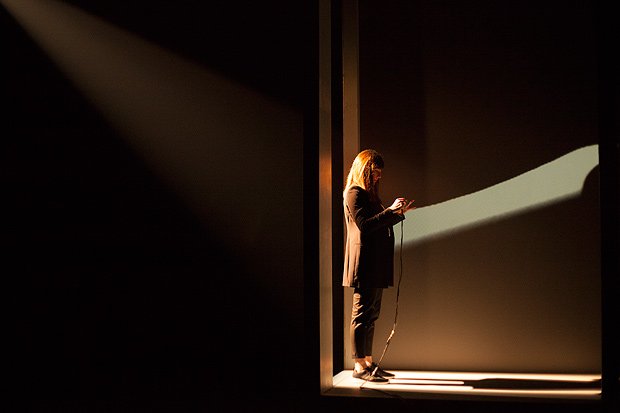 The human relationship to Artificial Intelligence is explored.

Anyone who has an iPhone will know of the inexpressive and sometimes intrusive voice of the personal assistant for the mobile device. This is of course Siri and this artificial intelligence is the focus of the show. Siri is a performance that looks at how we interact and converse with the devices that we carry around with us every day and how these devices can be a help and hindrance.

Laurence Dauphinais is the solo performer for the show. This is unless you include the iPhone that she constantly holds in her hands throughout the performance. Siri begins with the house lights up and the performer introduces herself to the audience. She gives a potted history of Siri and how Steve Jobs adopted the program for use on Apple devices. The screen from the Laurence’s iPhone is projected onto a vertical wall next to the performer. She talks directly with Siri and ask a series of questions throughout the show. Some of these questions are practical, some are probing, but they all allow us to understand how Siri thinks and how the A.I avoids answering the questions directly. Siri attempts to be helpful and sometimes fails. This can be funny, but it is also frustrating and here is where the drama and conflict of the performance comes to the fore.

Whilst Laurence talks to Siri a subtle drone sound plays in the background. This creates an eerie soundscape and sound designer Olivier Girouard has created an intimidating but slight soundtrack. This music adds to the anxiety and confusion that the performer occasionally expresses. Laurence is trying to understand Siri, but is having her questions ignored and struggles to identify with the device.

Siri looks at the relationship between the human and the digital world and showcases the differences, the mysteries and the unknown. It is a fascinating performance that asks more questions that it answers. Siri takes place at the Canada Hub at King’s Hall on South Clerk Street, around the corner from Summerhall .