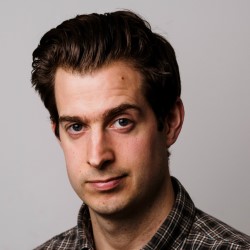 A keen eye for the absurd and an undeniable gift for joke-crafting.

Dave Green is a compact performer with a measured tone and confident demeanour which suits his less stream and more consciousness motif.  Unlike other performers who purport to indulge in spontaneous absurdity, he allows ample space for his ideas to percolate throughout the room.  His well-written material encompasses relationships, death, socialising and sentient AI but the resounding theme is one of wry curiosity at the everyday.

When discussing fashion that has curled up and died he explains cargo pants to a couple of young art students as the internet in your pocket.  Next, he ponders the possible cultural appropriation of doing a robot dance in front of an actual robot in a vignette from a dystopian and sentient future.  His set-ups are timed to near perfection allowing Green to control the room with aplomb and evoke complete comfort within the medium.

The intimate confines serve Green well and he clearly benefits from the eye-contact that can be achieved in such close quarters.  One suspects that his crowd work would be minimised in a more corporate atmosphere, but his polite enquiries allow an organic approach to material that on paper would seem clinical and disparate.

He finishes his set with a potentially barnstorming allusion of the sun as a bully.  Green is cajoled then forced along with the rest of society to leave their homes with solar invocations such as “get your clothes off…or i’ll blind you!”  Whilst the tone he sets could be described as deadpan, his smiling and benign presence adds warmth to what could be reduced to a series of set ups and jokes.

Green makes his subtle and slight observations work by sidestepping an overtly other-worldly persona and by throwing in some physical clowning which he juxtaposes with stillness for comic mileage.  With a little more attention to the stronger moments in the set Green could become the accessible face of the absurd.