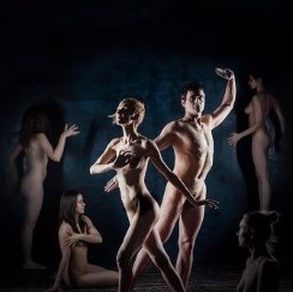 Despite some startling images and set pieces there is no discernible narrative, either actual or abstract

(Some)Body by the Alyona Ageeva Physical Theatre company is a very personal vision on the body and the soul, and features a stellar cast of extremely talented physical performers who go through often punishing rituals with their bodies to achieve their director’s vision on stage.

That being said, and whereas all kudos must go to the company for not being tempted to dilute or dumb down their story to make it more comprehensible to audiences; it is not clear to the audience what they are watching. There are some startling images and set pieces, particularly when a long-haired actress kneels at the front of the stage and drapes herself with her own tresses, making small economical movements through her hair with her fingers which are incredibly expressive and, discounting the obvious-seeming references to The Ring movies, evoke the dark places of Russian fairy tales or the disconcerting word pictures of writers like Gogol.

However, on the whole there is no discernible narrative, either actual or even abstract, in what we see here and the performers could be doing callisthenics whilst mentally going through their laundry lists or planning their dinners for all we know. Plus the musical soundscape designed by David Block – it has to be said – is fairly tedious, and, despite occasional pieces from the like of Purcell, the whole thing comes over like one of those awful “new age” CDs you find abandoned in charity shops where a synthesiser plays the same theme over and over again with different sound effects dubbed over – a bit like being caught in a nightmare universe where an Apple Loop plays constantly on repeat.

(Some)Body has obviously been put together with much care, talent and love, but, at the end of the day, this piece simply does not come together on stage.